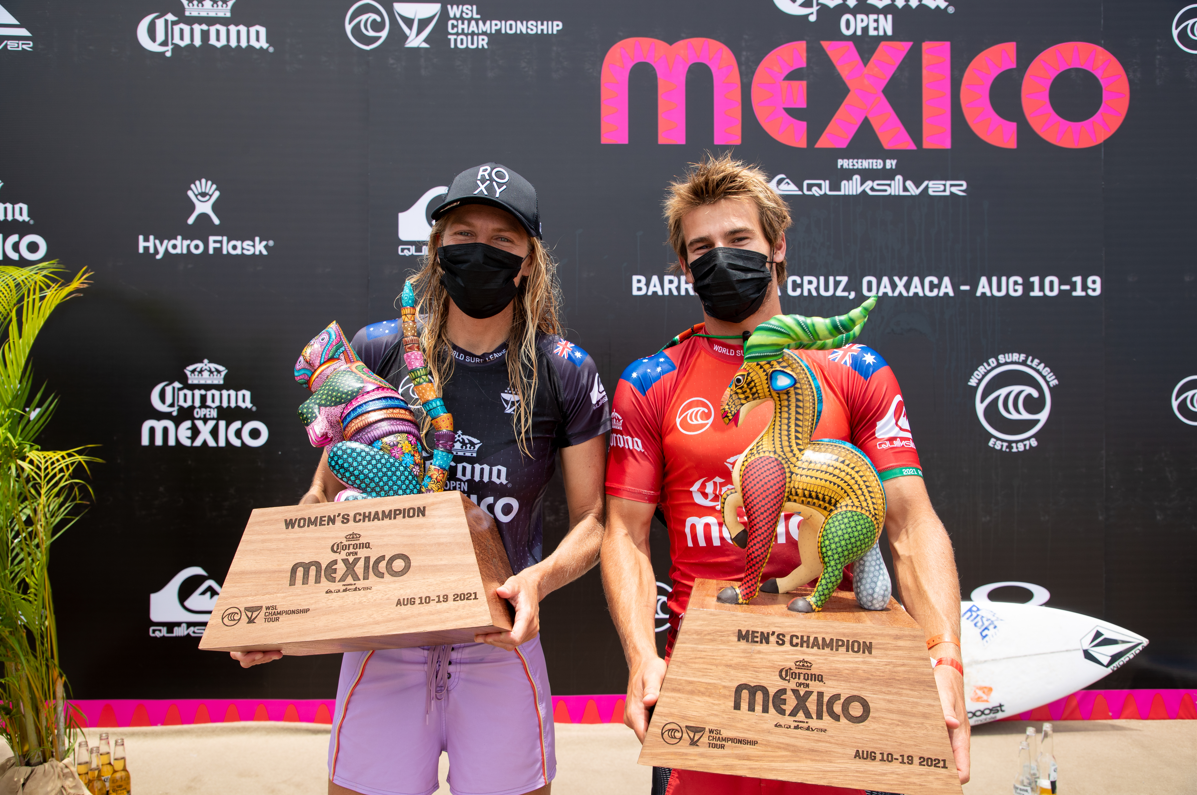 Gilmore earned her 32nd CT victory today, continuing to break her own record, after taking down a competitive field, including World No. 1 and reigning four-time WSL Champion, Carissa Moore (HAW), in today’s Semifinals and World No. 2 Tatiana Weston-Webb (BRA) in yesterday’s Quarterfinals.

“It’s unbelievable,” said Gilmore. “Malia (Manuel) was my pick for the whole event. She was on the right waves and surfing so beautifully. That Final was tough because every time she paddled past me she had the ‘AI Forever’ on her back and just felt like she had the mana. I knew it was going to be a tough Final, but that’s the best feeling ever.”

Gilmore’s win now moves her up into the fourth position heading into the Rip Curl WSL Finals, the one-day event in San Clemente to decide the 2021 World Champions. Gilmore will be the fourth seed, ahead of Johanne Defay (FRA).

“I haven’t won a contest in a while,” continued Gilmore. “I was hoping to climb up the rankings maybe one spot for the finals at Trestles so I didn’t have to surf as many heats on finals day (laughs). This is sick. Ever since seeing this event in 2006 for the men and losing Snapper off the Tour, this is the next best thing. I think knowing when Tahiti was canceled and this was the last event, all the pressure was on trying to stay ahead of the world’s best women in the lineup. This place is incredible and it’s just like home and I really love it here, I’m so proud to win here.”

Today marked Manuel’s sixth time in the Finals, but she has still yet to find the CT win through her 10 years on the CT. Manuel needed to win the event in order to requalify for the CT next season and missed out by one spot to California’s Courtney Conlogue (USA). Manuel will take to the Challenger Series for a chance to get back among the Top 17.

“I’m so honored to be here and I’m so grateful for the WSL family – everyone had long days to make this run smoothly,” said Manuel. “We got incredible waves and I’m happy to be standing up here with some incredible surfers. Steph (Gilmore) brings out the best surfing in me and I had a lot of fun. I think I’ve [felt that mana] all week just with little things and I’ve been really emotional all week – I’ve cried after every heat – and I think that has something to do with it.”

“We did it and I don’t even know where to start,” said Robinson. “It’s like a feeling I got when I qualified and I’m still in that state of processing it. Everything pushed me just trying to find all the right things to come together, so many things, and got a good team of support around me. The Doras, my wife Julia, my family, sponsors, I couldn’t do it without them.”

The Corona Open Mexico pres. Quiksilver is the last event of the regular season before the Rip Curl WSL Finals, and similar to how he qualified for the CT in 2019, Robinson was able to top off his rookie year with a win in the final event.

“I was trying to carry the energy even before this I came down here,” added Robinson. “When I’m in a certain zone I don’t say too much and I was in that zone this week and just being able to rise above the level of surfing that everyone was at, I felt like I could do that in every heat. This win and everything is for Toro of Toro Surf Trips, his son passed away and it’s really sad, and just want to send big love and prayers to him.”