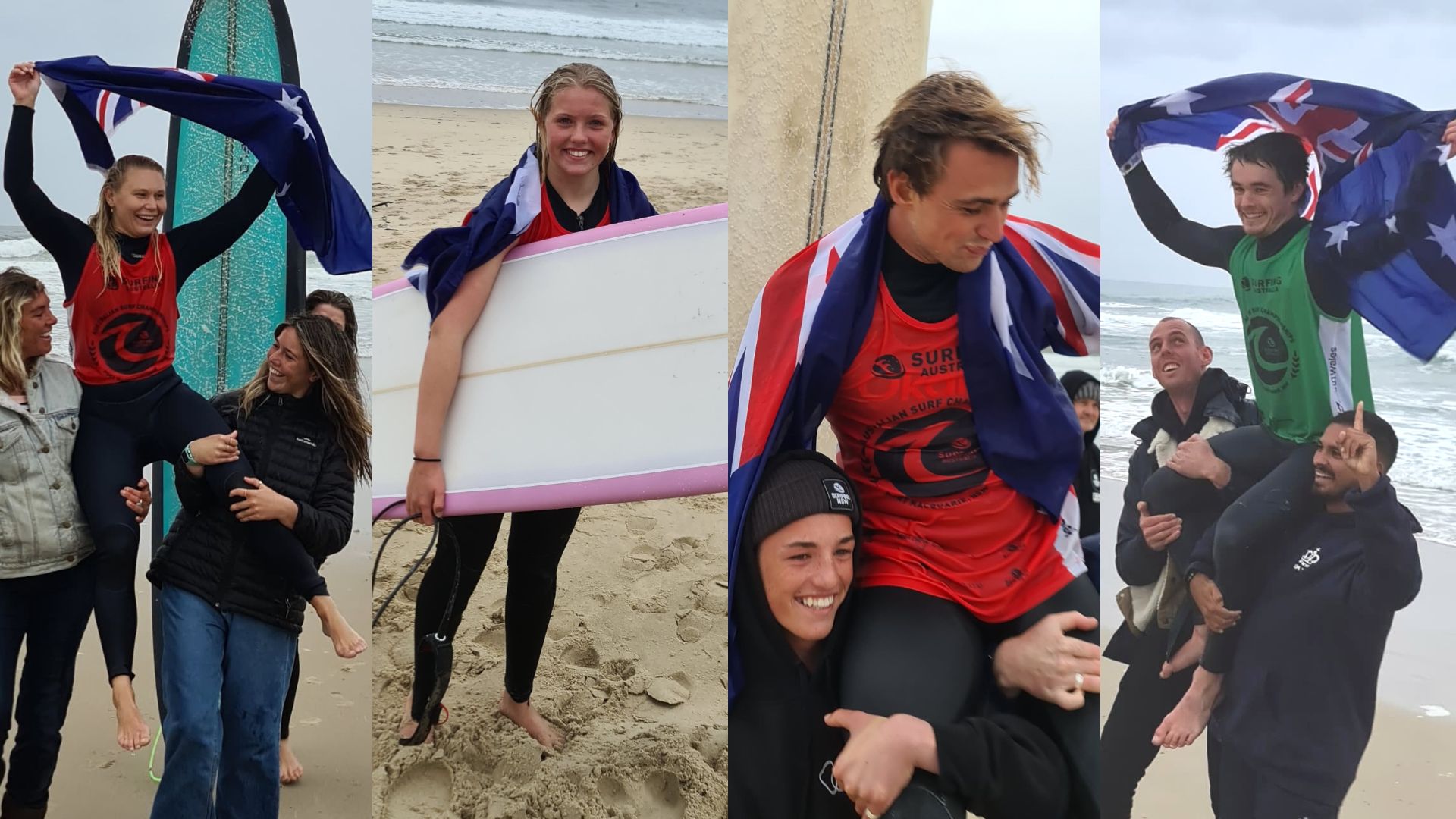 The Australian Surf Championships continue today with the Australian Longboard and Logger Titles being held between 11-19 August alongside the Shortboard, Para Surfing and Bodyboard Titles.

Melanie Staunton (NSW) and Declan Wyton (NSW) took out the Open Longboard Titles whilst Kirra Molnar (QLD) and Ben Considine (VIC) were the champions of the traditional Logger Titles.

The second event of the Australian Surf Championships kicked off yesterday with a big southerly swell that tested the surfers. There was sufficient protection thanks to the North Haven breakwall and surfers were able to find workable sections to impress the judges within their 25-minute heats.

Declan Wyton (NSW) and defending champion Clinton Guest (QLD) were clear standouts in the Open Men’s Longboard and Logger opening rounds. Wyton, who has just returned from the second World Longboard Tour event in California, scored a near-perfect heat total in Longboard round three with two nine-point rides. Meanwhile, Guest continued to impress in his heats across two days.

The rivalry between the pair fuelled the anticipation of the Longboard finals as they went wave-for-wave from buzzer to buzzer. However, it was Wyton who got the edge with a high scoring eight and then held strong to combo the field and take the win, bringing Guest’s reign to an end.

The Open Men’s Logger was like ground-hog day for the pair, this time with Evan Ledger (WA) and Ben Considine (VIC) in the mix. It was the Victorian who took the upset of the day after taking the lead and a double-crown from Wyton with a pair of six-point rides.

Considine (25) from the Victorian Surf Coast is now a three-time Australian Champion and said the feeling was still the same. “I’m so stoked to win with such tough competition. I wanted to stay busy in the final to keep Declan at bay because he had a number of 9’s throughout the event. He’s such a well balanced surfer and is always difficult to beat. I started with a six and continued to build the house from there. I ended up getting the wave I needed to clinch the crown.”

In the Open Women’s Logger, 19-year-old Bea Conroy (VIC) set the level high from the get-go with the highest heat total for the women across both divisions after being awarded an 8.25 for an excellent wave.

In the finals, Conroy held the lead until the final five minutes when Kirra Molnar (QLD) dug deep to find a nine-point ride – an excellent range score and all she needed to seal her first Australian Title.

Conroy had 25 minutes between finals as she then turned her hand to the longboard. The Open Women’s Longboard final saw Lucy Small (WA) collect a pair of five-point-rides early to put her in the lead. A solid seven by Melanie Staunton (NSW) posed the first threat to the Western Australian before a late 6.8 sent Bea Conroy like a bullet from third to first with just two minutes remaining.

Looking likely to take out her second win on the day, Staunton then spoiled the party with a last minute move. It was the 4.5 score that would earn her the 2022 Australian Longboard Title.

At just 17-years-old, Staunton from Ulladulla on the NSW south coast was stoked to win.

“I was a little bit nervous with the wind coming up but the rain settled it down,” she said.

“I knew where to sit and where the waves were so it was about getting the right waves and surfing. It was unreal. I was in third and a wave came through. I’m so happy. This is my first Australian Title, it’s such a surreal experience, it’s amazing.”

The Longboard and Logger Titles continue tomorrow with the Under 18 Men’s and Women’s divisions that will conclude on Sunday, as well as the opening rounds of the Masters divisions to conclude next week.

Location and schedule subject to change based on conditions. For live updates and links, follow @surfingAus Instagram. For all live results, visit the Longboard Live Heats and Logger Live Heats event pages.

What’s the difference between the Logger and Longboard Titles?

The Logger divisions are a homage to traditional surfing from the ’60s and ’70s where more traditional manoeuvres performed with a continual motion, style and grace with emphasis on creativity are scored highly. Boards used in the Logger divisions have specific requirements including a single fin and traditional board measurements around shape and design.

Longboard divisions have a greater judging emphasis on performance, expression and progression. Surfers are scored on their ability to be dynamic with manoeuvre in the most critical parts of the wave while combining speed, power and flow. The boards in the Longboard divisions are a multi-fin setup.

Longboard Divisions for Men and Women include:

Logger Divisions for Men and Women:

Surfing Australia is working in conjunction with Surfing NSW to bring the 2022 Australian Surfing Championships to wave-rich Port Macquarie to crown the newest Australian Longboard and Logger Champions.