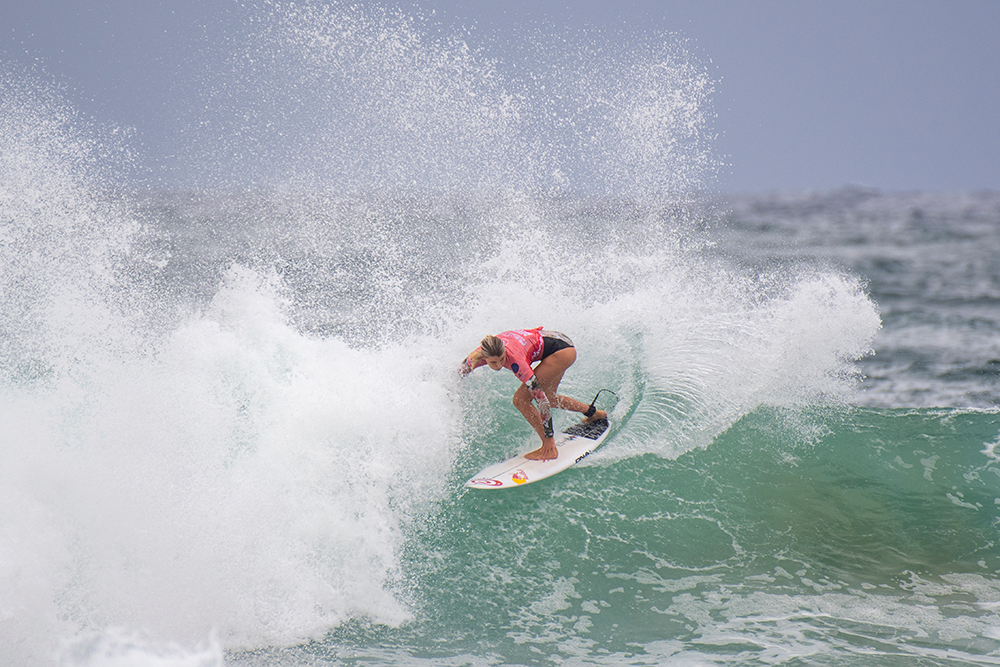 AVOCA BEACH, CENTRAL COAST (Wednesday, 3 March 2021): Day two of the Vissla Central Coast Pro and Sisstrevolution Central Coast Pro saw many of the world’s best surfers call up the best of their ocean skills as they battled seriously challenging surf in the six-foot range at Avoca Beach on the Central Coast of NSW.

Challenging seas are nothing new to one of Australia’s greatest surfers in Sally Fitzgibbons and she absolutely thrived in the powerful waves on offer today. Fitzgibbons reeled off three excellent eight-point plus rides to take the easiest of heat wins and she looks in magnificent form as her most important season ever approaches.

“It’s really exciting for us now that we have some certainty about the events ahead and I really do feel well prepared right now” said Fitzgibbons. “The Championship Tour and the Olympics are huge goals this year and particularly these beachbreak events I feel are good for my preparations because that’s what we’ll face in Japan. I also really enjoy the emerging Australian talent and seeing the future, it’s exciting.”

One of those emerging talents is Central Coast local Molly Picklum who appeared very comfortable in the rugged conditions today as she easily won her round of 64 heat with a solid 14.90 two-wave heat total. Currently sitting in second position on the WSL APAC Qualifying Series rankings, the Shelly Beach natural-footer appeared hungry to post another massive result and possibly jump into the top spot above current rankings leader Bronte Macaulay.

“The waves were so much fun out there and I just felt like I wanted to keep surfing,” said Picklum. “I surf here quite a bit with my coach Micro (Glenn Hall), so I’d say I’m reasonably confident with the way this beach breaks. I also think having Micro still in the event and watching him surf yesterday really inspired me to do well. Hopefully, I’ll keep the roll going.”

Arguably the day’s best performers came late in the day as local star Macy Callaghan demolished the large surf and claimed an excellent wave score of 8.8. A few heats later and Newcastle’s Philippa Anderson would eclipse that score with an 8.9.

“I love competing here,” said Macy. “It’s my home and this is the surf I grew up in so it’s just a great event for me to fine-tune before Newcastle. I’ve set goals for this year now that I’ve surfed the CT for the past few years and I’d really like to push my way into the top 10. It’s exciting to be back and competing.”

The forecast for this entire event is excellent and tomorrows women’s round of 32 should be blessed with amazing surf along with opening heats of the round of 64 men’s which sees the top seeds enter the water headed by Australian Olympic representatives Owen Wright and Julian Wilson.

For more information on these events head to worldsurfleague.com or check the free WSL App.