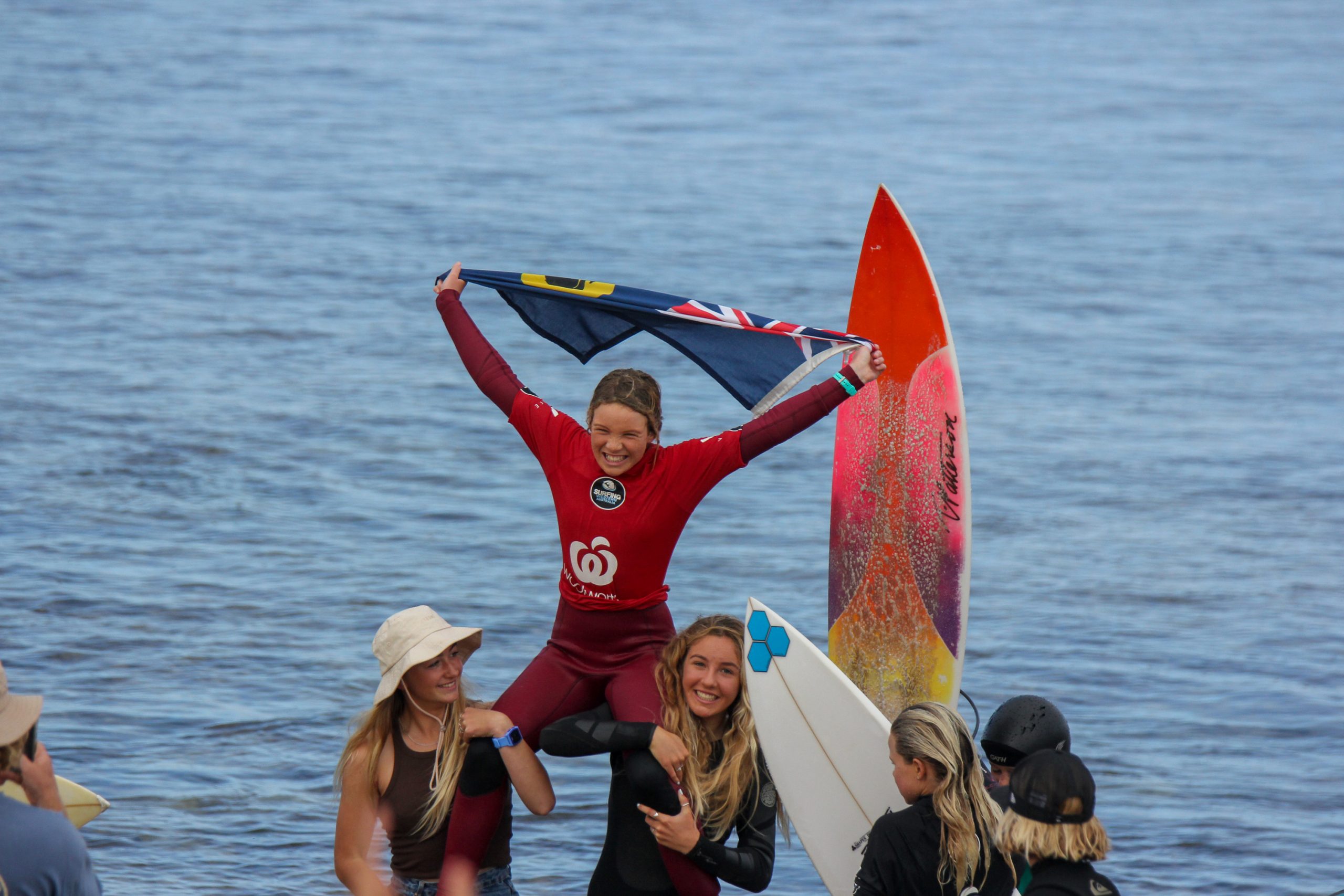 GERALDTON, WA/AUS (Monday 19th July 2021) – Multiple State Champions have been crowned in clean and powerful surf at Flat Rocks, south of Geraldton, with the 2021 Woolworths WA Junior Surf Titles presented by SunSmart concluding in an exciting and memorable fashion.

Western Australia’s newest generation of surfing stars lit up the Batavia coastline over the weekend, battling through two days of amazing winter conditions in hopes of claiming a prestigious State Championship Title and for the opportunity to represent WA at the 2021 Australian Junior Surfing Titles.

Light offshore winds combined with a groomed groundswell to provide 2-4 feet surf all weekend long, with a high standard on display across the seven divisions that hit the water.

“I’m stoked to get the win in front of my friends and family. That was a tough one, but I’m glad I found some good waves that held up on the reef just right,” said Hagan. “All the boys were ripping and congratulations George for the State Title.”

Margaret River’s Willow Hardy was one of the standout surfers of the event, showing a new competitive edge after earning a World Surf League (WSL) wildcard position into the Margaret River Pro earlier this year. Hardy had already claimed the Under-18 Girls State Title with wins in Margaret River and Trigg, but she made it a clean sweep in Geraldton, with her third straight win of the series.

“I’ve had the best time up north and this weekend’s conditions have been amazing,” said Hardy. “I couldn’t be happier to have won the 18 Girls Title.”

The Under-16 Cadet Boys final was a pleasure to watch, with some critical and flashy surfing offered up by all four finalists. Macklin Flynn (Cowaramup) shone the brightest during the 25-minute final, scoring a combined total 15.40 (from a possible 20), to take down inform surfers Okie Fraser (Margaret River), Spike Jacobs (Mandurah) and Kade Martin (Dunsborough).

Flynn displayed the hallmarks of a future champion, dropping an excellent 9.25 and backing it up with a 6.15 for some flawless top to bottom backhand surfing.

Willow Hardy (Margaret River) backed up her win in the Under-18 Junior Girls division with victory and the State Championship Title in the Under-16 Cadet Girls. Picking off great waves and using her powerful rail game, Hardy claimed her second State Title of the year, by taking down Ruby Berry (Augusta), Kaleisha Launders (Margaret River), and Isi Campbell (Denmark).

“I’m so excited to have won both the 16’s and the 18’s Titles it’s been a really fun event with some great waves,” said Hardy. “All the girls have been ripping and they pushed me hard in that final.”

Olive Hardy (Margaret River) matched her sister’s efforts and kept the winning ways rolling for her family by capturing the Under-14 Grommet Girls State Title with a dominant performance. Hardy used her backhand to extract maximum points and proved too strong for Mia Jacobs (Mandurah), Leila Fraser (Margaret River) and Grace Cook (Cowaramup).

“I’m speechless right now,” said Hardy. “I want to thank everyone for such a such a fun event, my family, my friends and even my cat, who have all helped me get here.”

In other results from the weekend, Cruz Uros (Dunsborough) proved he’s a star on the rise claiming an impressive double victory in the Under-14 Grommet Boys and Under-12 Micro Groms divisions.

Uros seemed to click into perfect sync with the waves at Flat Rocks and was on fire in the Under-14 Boys final. Uros linked major manoeuvres and was able to keep his competitors at bay, with Sid Englert (Gracetown), Okie Fraser (Margaret River) and Jack Bulloch (Secret Harbour) rounding out an impressive top four.

“I’ve had the best day ever,” said Uros. “The waves have been so fun and I really love the waves here at Flatties.”

Although not making the final, Maverick Wilson (Mandurah) was crowned Under-14 Grommet Boys State Champion for 2021 on the strength of his performances at Margaret River and Trigg earlier this year.

Cruz Uros was over the moon to win his first State Championship Title with victory in the hotly contested Under-12 Micro Groms division. Surfing with maturity beyond his years, Uros was pushed all the way by a pack of energetic young frothers including Rhys Bulloch (Secret Harbour), Cruz MacDonald (Geraldton) and Aston Grime (Secret Harbour).

“This is a day I’m not going to forget for a while,” said Uros, “I’m really happy and want to thank Wooly for his coaching and Surfing WA for the comp.”

After an epic three event series, Surfing WA will now focus on preparing their State Champions and State Team qualifiers for the Australian Junior Surfing Titles scheduled to be held in Queensland in December.

“After great events in Margaret River, Trigg and here in Geraldton, I’d like to congratulate our 2021 WA Junior State Champions, divisional winners and finalists for an exciting title race,” said Surfing WA Events Manager Justin Majeks. “This event has displayed the depth of talent we have in WA at the moment and it as great to watch it all play out.”