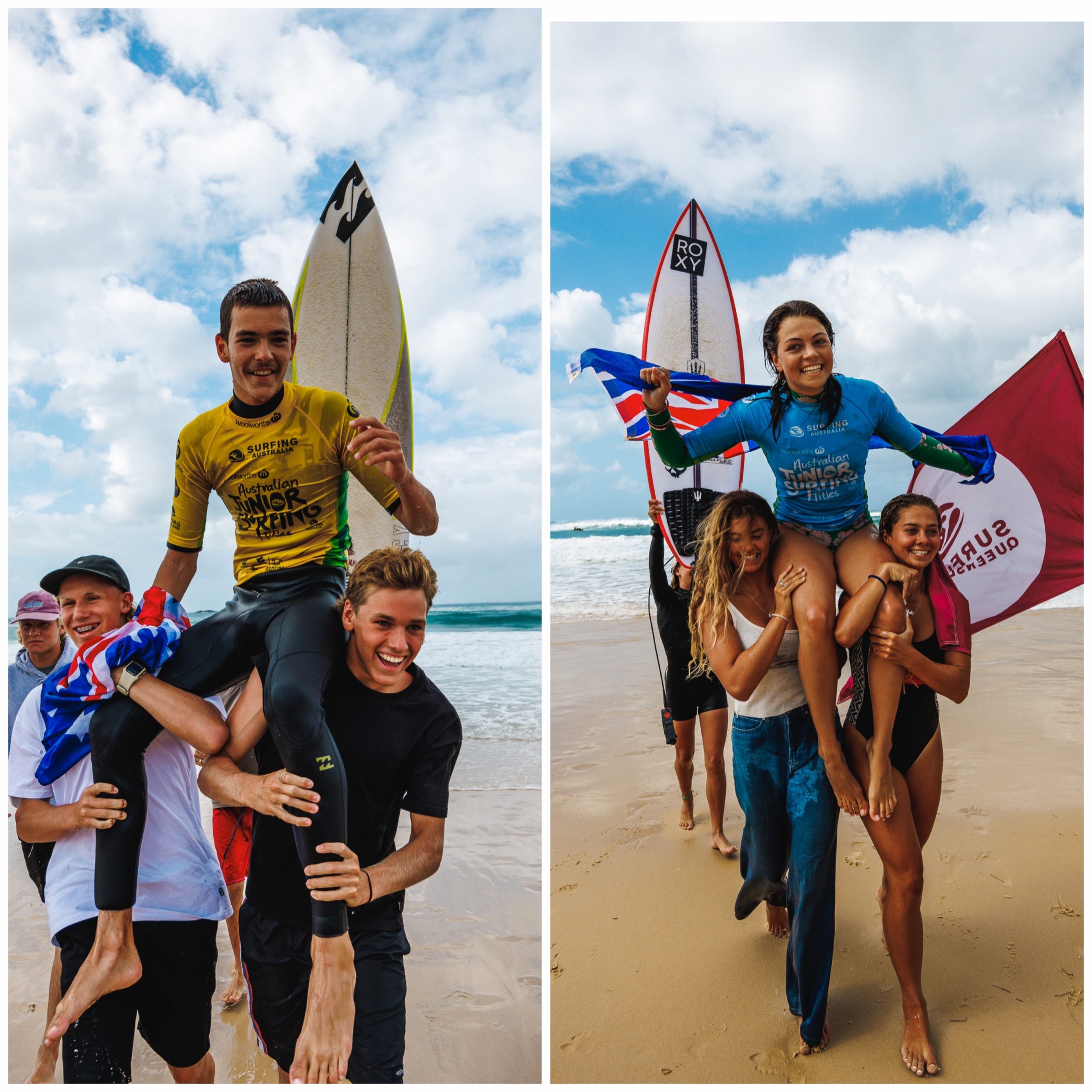 It was a day of impressive airs, close contests and making dreams come true at the finals of the 2022 Woolworths Australian Junior Surfing Titles.

New South Wales and Queensland dominated the competition with all six new Australian champions hailing from the two States.

Winners of the U16 & U18 Men and Women qualify for the 2023 Junior Irukandjis team to represent Australia at the 2023 ISA World Junior Championships.

Harley Walters (Angourie, NSW) was on fire from start to finish posting a heat total of 15.75 in Under 18 Men in a close contest against Dane Henry.

“I’m stoked. I didn’t think I’d get there,” Walters said.

Coco Cairns (Tewantin, QLD) was also lost for words when asked about her win in Under 18 Women and making the National team.

Surfers were on form in the shore break at Cylinders Beach. The Queensland tent erupted when Rico Haybittle (Palm Beach, QLD) launched into an air reverse setting up a good start to his finals campaign to take out Under 16 Men.

“So amazing, I’m frothing, just so psyched,” he said.

Under 16 Women’s winner, Milla Brown (Newport, NSW) said: “Feels so good. I was looking at the honour roll before and I was thinking it’s my dream to be on this list. And I’ve always wanted to go to the worlds (ISA World Junior Surfing Championships). It has been a dream of mine since I was two.”

Ocean Lancaster (Merewether, NSW) snared a last minute ride to take out the U14 Boys, netting the highest single wave score of the day (8.60).

“All the boys were dropping big numbers and I thought alright this is my last chance and that first section I knew I had to do something big so I just went for it. I’ve been looking forward to this comp all year, it’s such a big comp and everyone is coming from all around Australia, yeah I’m frothing,” he said.

Eliza Richardson (Sunshine Beach, QLD) was the U14 Girls winner.

“It felt really good because I was nervous and really hard competitors but yeah I’m really stoked to win. Today was really good and really fun,” she said.

Surfing Australia Contest Director, Glen Elliot said: “After a two year break junior surfing is back! This event had everything from challenging conditions through to finishing in highly rippable shore breaks at Cylinder Beach with the grommets revelling in the conditions. The camaraderie and support shown by all the surfers for the full seven days shows that junior surfing in Australia is in a very good place. The winners of the national rankings and the winners of the Australian junior titles mean that the junior iIrukandjis will be our strongest team ever.”