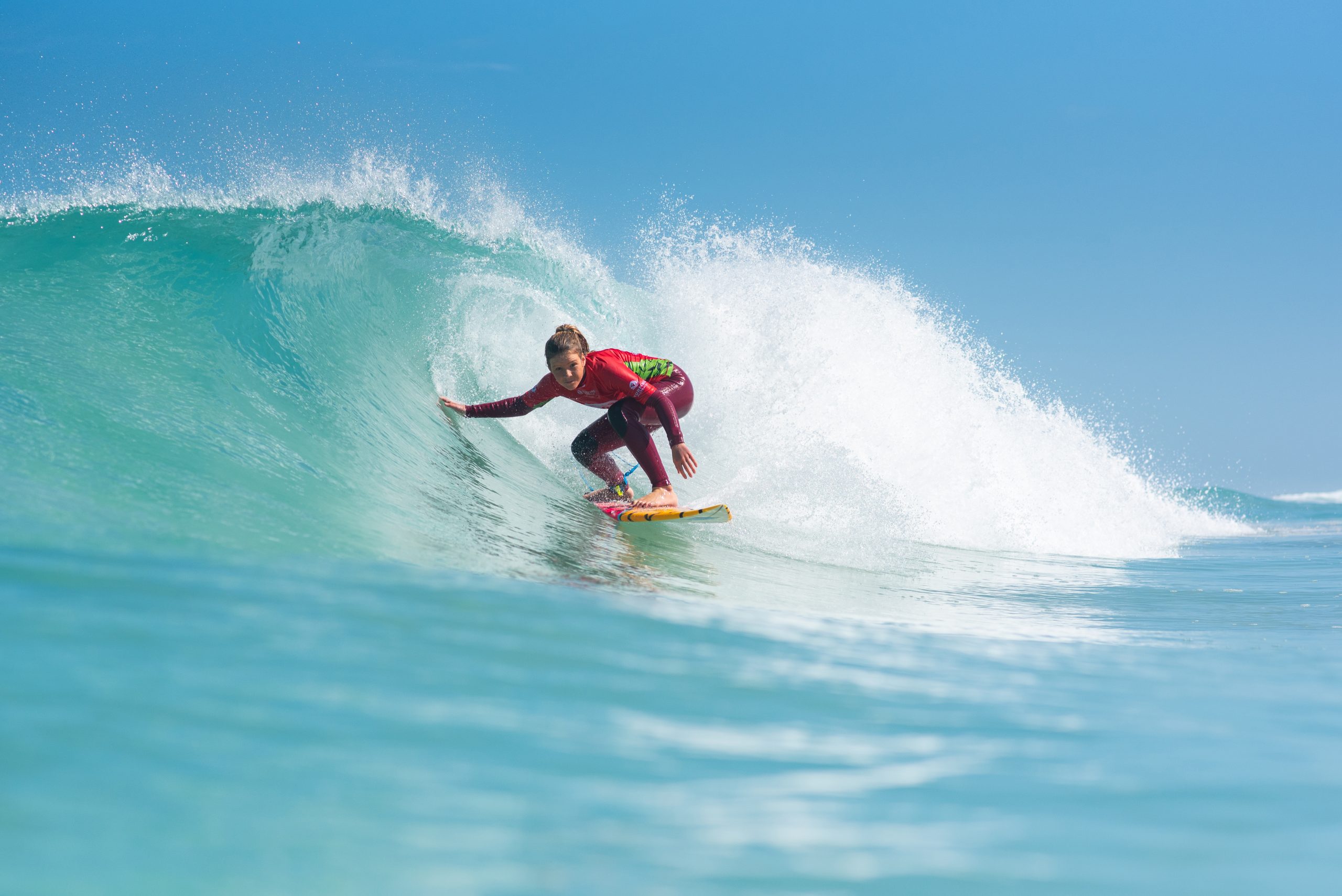 Seven champions were crowned as competitors from across WA benefitted from light winds, sunny skies and pulsing 2-3 feet waves along the metropolitan coastline.

The Woolworths Surfer Groms Comps is the only Australian event series catering for the increasing numbers of the country’s ‘micro-groms’, with boys and girls lining up in Under-8, Under-10, Under-12 and Under-14 divisions.

The Woolworths Surfer Groms Comps are a fun and friendly introduction to surfing competition, with close to 70 grommets impressing with their skills and sportsmanship on display in and out of the water.

Dunsborough’s Maverick Wilson took out the blue-ribbon Under-14 Boys final, claiming back-to-back wins and downing some of the WA’s hottest young surfers in the process. Wilson’s win came in the final minute of the event, where he blasted off on his backhand to book his spot to an all-expenses-paid, three-day Woolworths Surfer Groms Comps National Final Surf Camp, (1-day coaching clinic, 2 days of competition and heat analysis coaching) at the Surfing Australia High-Performance Centre (HPC).

Wilson used his razor sharp forehand and lightening fast backhand to post a two-wave total of 14.77 (from a possible 20) to defeat an impressive trio that pushed him all the way, including Okie Fraser (Margaret River), Ace Flynn (Cowaramup) and Crus Uros (Dunsborough).

“I was pretty nervous out there,” said Wilson. “The waves had been on fire all weekend, but the conditions changed heaps this afternoon making the going pretty tricky and it was hard to find a wave to really open up on.”

Margaret River’s Willow Hardy also made the most of the testing afternoon conditions, claiming victory in a similar fashion to Wilson, with an excellent 8.00 (from a possible 10) coming in the final moments of the in the Under-14 Girls final.

“I’m so happy right now,” said Hardy. “This is probably one of the best prizes you can win and after my sister Willow attended the HPC in the past, I always wanted to go as well. Thanks to all the girls in the final and thanks to my family for their support.”

The Under-12 Boys and Girls also provided plenty of highlights, as they also battled hard through the windswept afternoon conditions.

Cruz Macdonald (Geraldton) was a standout, claiming a gutsy win in the Under-12 Boys. No stranger to a bit of wind, hailing from the Mid-West, Macdonald’s surfing stood up when it mattered most, finishing ahead of Jack Bulloch (Secret Harbour), Cruz Uros (Dunsborough) and Taylor Flynn (Cowaramup).

“This is probably my biggest win I’ve had so far,” said Macdonald. “Thanks to my mum for driving me all the way from Geraldton and all the sponsors and surfers who made it such a memorable event.”

Grace Cook (Cowaramup) proved she’s definitely a surfer to keep an eye on, winning the Under-12 Girls final. Cook’s improvement over the last 12 months was obvious to anyone watching, as her strong technique and superior wave selection saw her take the win ahead of Sienna Bowdell (Cowaramup), and Mandurah duo of Isla Wroth and Neco Higgins.

“I’ve loved this weekend and apart from that final, the waves have been really good,” said Cook. “Thanks to my friends and family who have helped me so much.”

Jack Bowdell (Cowaramup) and Luca Jacobs (Mandurah) were a popular winners of the Under 10 Boys and Under 10 Girls divisions respectively, with the pair impressing greatly getting chaired up the beach to great applause.

While, Fred Browne-Cooper (Swanbourne) took out the hotly contested Under 8 Micro Groms division on a combined total of 13.33 (from a possible 20), which saw him pushed in by his dad and complete a series of impressive power wiggles on his way to the win ahead of Amelie Waddell (Wembly Downs).

“Our WA grommets should all give themselves a big pat on the back,” said Surfing WA Events Manager Justin Majeks “The levels of froth, fun, encouragement & excitement on display were through the roof this weekend.”

Two lucky surfers were recognised for their efforts and sportsmanship at the event, receiving the Woolworths ‘Fresh Pick’ Award, with Okie Fraser (Margaret River) and Grace Cook (Cowaramup) each receiving a $250 Woolworths gift voucher.

Regarded as one of the major stepping stones in the development of young Australian surfers, the 10-event Woolworths Surfer Groms Comps series caters for surfers from Under 8 to Under 14 and will be held in South Australia, Western Australia, New South Wales, Queensland, Victoria, and Tasmania over summer.