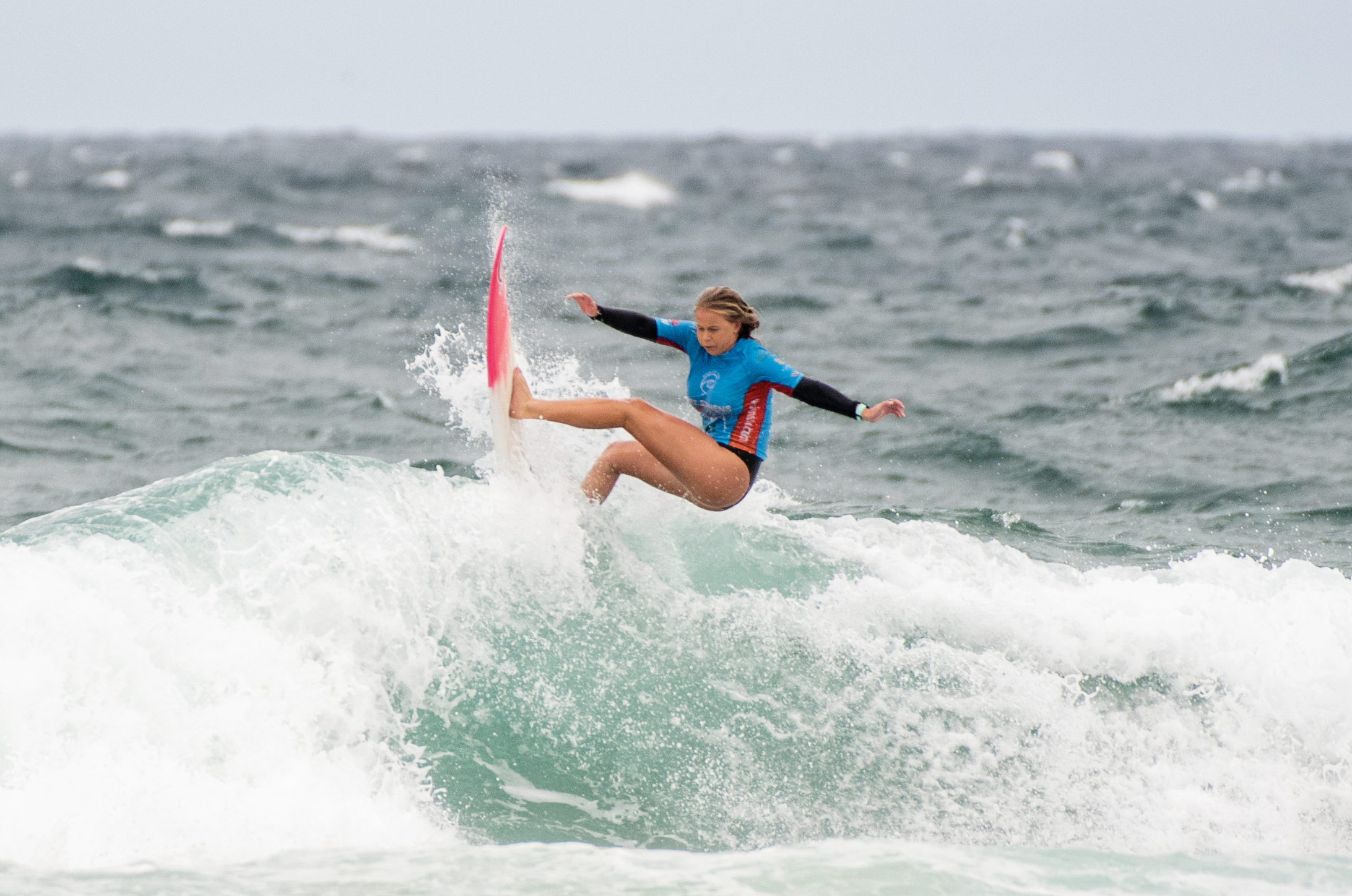 COOLANGATTA, QLD / AUS (Sunday, February 21, 2020) –  The 2021 Australian leg of the World Surf League (WSL) Qualifying Series (QS) has continued today with the opening day of competition at the Port Stephens Pro presented by Mad Mex seeing plenty of action at Birubi Beach. Competitors in the opening rounds of competition did battle in tough, two-foot onshore surf for the second event of the season.

Coolangatta local Jaggar Bartholomew was the standout of Day 1, posting the highest two-wave combination of the event so far which included an excellent 8.50 (out of a possible 10) for a series of massive backside snaps. Bartholomew has come into 2021 with an added spring in his step, taking an early victory over former Championship Tour surfer Matt Banting at last weeks Great Lakes Pro and is hoping to follow that same trajectory over the remainder of the Australian leg.

“I don’t feel like I did too much out there and that I would just get a 6.5 or a 7, so I was definitely happy to find out it was an 8.5,” said Bartholomew. “I’ve been putting in a lot of work behind the scenes to achieve my goals and my dreams and I’m trying to do all the right things to get me closer to that point.”

South African born and Australian based Sarah Baum dominated the opening round of the women’s event, posting a near excellent two-wave total of 15.50 for an epic combination of snaps and carves. Baum was disappointed with her efforts at the Great Lakes event and was happy to progress with a dominating display on Day 1 at Birubi Beach.

“I learnt a lot of lessons from the last event and I think I was just too relaxed,” said Baum. “I just wanted to stay really busy in that heat and I knew there were some fun little waves if you could hunt them down. I think the hiatus from QS events allowed me to really dial in my board and the Australian Open of Surfing series definitely helped get all of us back into the competitive mind space.”

Coming up against a local competitor can be a daunting feat for some surfers, but Maroubra junior dynamo Koda Killorn took it in his stride in his opening exchange against Port Stephens local Mike Clayton-Brown. Killorn found a handful of playful and punchy lefthanders in the heat to post a respectable 10.45 two-wave heat total to cement his spot into the round of 64.

“The conditions were definitely tricky,” said Killorn. “There were some scorable waves but it was really hard to find them. I was a little worried coming into this heat against Mike. He knows a lot more about this beach than I do, so to get the win over him feels pretty good. My whole tactic was to sit on my own and stay away from all the other competitors.”

Brett Burcher is a name in Australian surfing synonymous with hunting some of the heaviest and biggest waves in the country. The South Coast resident hasn’t competed in a QS event in over ten years but is looking for a new challenge in surfing heats in all sorts of conditions. The 31-year-olds QS campaign didn’t get off to the best start at the Great Lakes Pro as he went down in his opening match-up. Today however he was able to post a decent heat total in the challenging conditions to take his heat and progress into the Round of 64.

“I haven’t competed on the QS since I was in my teens so it’s been a while,” said Burcher. “I guess my reasoning for competing in these events is just for a different experience and a new challenge — it’s been good and keeping me on my toes for sure. It’s funny how people think as someone who chases bigger waves I’d struggle in the small stuff, but this is what we surf all the time so I was confident I had what it took to post a couple of scores. It’s good to make a heat so I’m looking forward to seeing what tomorrow brings.”

After an uncharacteristic first-round loss at the Great Lakes Pro, Lennox Head surfer Nyxie Ryan came into the event at Birubi eager to make up for lost ground. Ryan made her intentions clear, hammering a series of impressive snaps and carve to finish the heat with an 11.75 two-wave heat total to post the victory.

“It’s really windy out there, but there were a few lefthanders if you were in the right spot,” said Ryan. “After not making one heat in the last event, I really wanted to get through a few heats here. I’ve been training pretty hard and surfing at home with people like Connor (O’Leary) and Owen (Wright) as they’ve really been pushing my surfing.”

Sawtell’s Rosie Smart has been on a tear since taking out the 2020 Under-16 NSW Junior State Titles, consistently notching up impressive heat victories in a range of different events. The light-weight goofy-foot entered her first WSL QS event at the recent Great Lakes Pro pres. by Surfers Rescue 24/7 and proceeded to put on a dominant performance in her first few heats. Smart’s Port Stephens Pro campaign followed a similar path smashing her way through her opening heat. Smart finished the exchange with a healthy 12.50 heat total to cement her spot into the round of 32.

“The event at Great Lakes was my first QS event and I really wanted to gain heat experience through this leg,” said Smart. “I don’t feel the pressure too much in these events as I don’t think I’m expected to win, so I feel like I have nothing to lose. If I can get through a few heats at each event then I’ll be happy.”

The Port Stephens Pro pres. by Mad Mex, stop 2 on the 2021 Australian Qualifying Series leg will run from February 21 to 23. Head to www.worldsurfleague.com or the free WSL App for more information and to watch the event LIVE.