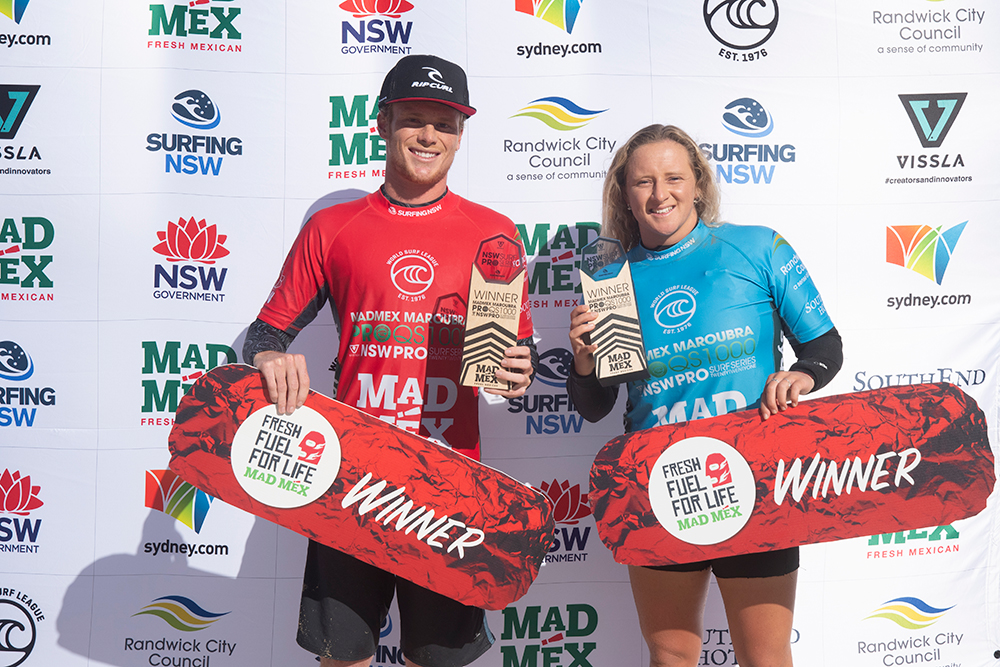 MAROUBRA BEACH, SYDNEY (Sunday, 28 February 2021): Dylan Moffat and India Robinson have taken out the 2021 Mad Mex Maroubra Pro World Surf League (WSL) Qualifying Series (QS) event today after a day of challenging one-foot waves at Maroubra Beach. Nevertheless, some of Australia’s best were on-hand to make light work of the waves and put a champagne finish on what has been a stellar event.

Moffat looked like he had rockets on the back of his board over the course of the Mad Mex Maroubra Pro, flying effortlessly around dead sections and performing a multitude of giant turns in the tiny conditions. The northern beaches native appeared to re-tap into the momentum that saw him claim the 2020 Australian Open of Surfing series late last year as he consistently posted decent scores for critical manoeuvres. Moffat will now head into the upcoming Vissla Central Coast Pro with his head held high, as he looks to notch up a massive finish to a giant WSL QS leg. The win at Maroubra is Moffat’s first QS victory.

“I’m so elated, to have the year I had at the end of 2020 and to come into this event and take it out really makes me feel like my hard work is paying off,” said Moffat. “It would have been awesome to trade off some bigger waves with Soli. I have so much admiration for him and to be able to have a final with him feels pretty awesome.”

After being dubbed by many as the surfer to beat at the recent Port Stephens Pro – before being eliminated in the semi-finals – India Robinson looked unstoppable as she made her way to Maroubra. Robinson shone across all her earlier heats, consistently posting two-wave heat totals in excess of 13-points. The win at Maroubra is the Victorian surfers first major QS win since the Phillip Island Pro back in 2018.

“I’m over the moon with this result, especially to win in these conditions,” said Robinson. “Small waves are generally not my strong suit, so to claim a win when it’s like this gives me a lot of confidence as we head into the Central Coast. I tried to get busier and just hope for the best to be honest. Hopefully, this will be the first good result of many.”

Showing genuine shock that he even made the final in the tiny surf, men’s runner-up Soli Bailey struggled to find rhythm against Moffat as he sat patiently and waited for an elusive wave that never eventuated. Despite looking ready to strike if provided with the opportunity, the former Championship Tour surfer was unable to find a score of substance in the wave-starved final and had to settle for second position against Moffat.

“I felt like I built through the event and was feeling really confident going into that final, but the waves just didn’t come and I think I might go into the history books for one of the lowest heat totals ever (laughs),” said Bailey. “Dylan got the only real wave of substance that came through and he smashed it apart, so I’m stoked for him. He’s been surfing so well over this QS leg and I couldn’t be happier for him.”

Runner-up Sophie McCulloch has shown that she’s eager for Challenger Series qualification, surfing with aggression and style the whole way through the event. After notching up a runner-up finish in the Great Lakes Pro and a quarterfinal finish at the recent Port Stephens Pro, McCulloch came into Maroubra keen to go one step further, but was unable to find the necessary 8.75 wave score needed to take away Robinson’s lead. The Sunshine Coast surfer took multiple scalps along the way to the final, eliminating current world number three Sally Fitzgibbons and perennial event standout Dimity Stoyle from the event.

“It takes a while for the sting of losing a final to wear off, but at the end of the day you sit back and look at the event you had and you can be a bit happier, but yeah, I can’t wait to win one hopefully,” said McCulloch. “It was awesome to have that quarterfinal against Sally and come away with the win. Having a heat win like that gives me a lot of confidence especially as we head into the Central Coast where a lot of Championship Tour surfers are competing.”

Special mention must go to Dimity Stoyle, Kehu Butler, Philippa Anderson and Kalani Ball who all went down in the semi-finals. Although they were unable to clinch QS victories, all surfers put on impressive performances and notched up a handful of excellent scores over the duration of their campaigns.

The live broadcast of the Mad Mex Maroubra Pro began on Saturday, 27 February 2021 and was streamed live on Surfing NSW website and Facebook.

For more information on these events head to worldsurfleague.com or check the free WSL App.