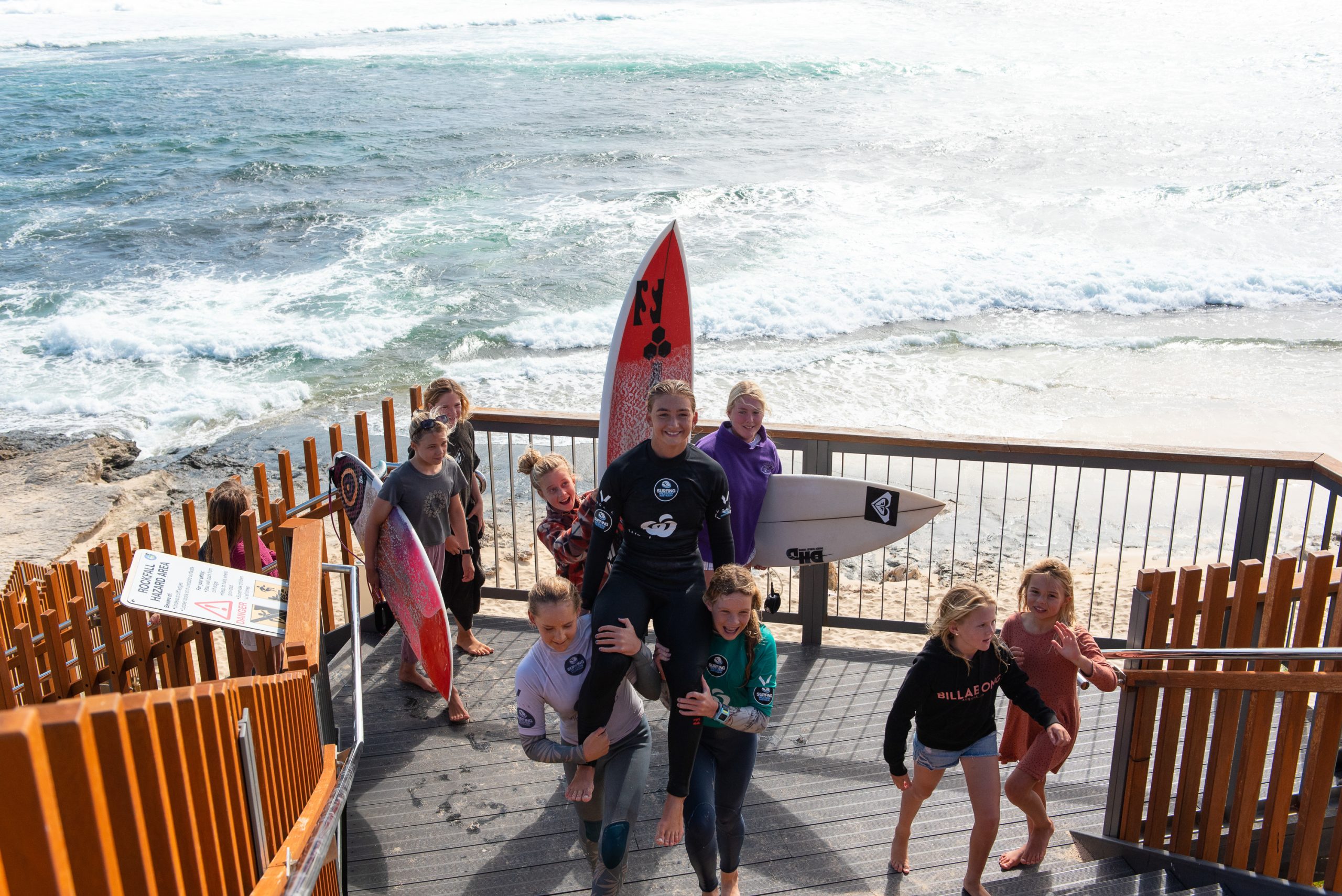 Soon to play host to the fifth stop of the World Surf League (WSL) Championship Tour (CT), Main Break showed it versatility, handling a variety of conditions over the weekend, with clean 2-3 feet waves early on Saturday, building into windswept  6-8 feet surf yesterday.

The conditions brought out the best from WA’s newest generation of surfing stars, who clearly relished the opportunity to surf at a CT location, drawing inspiration from their idols, as seven champions were in what was a truly memorable weekend of waves and performances.

Surfers stepped it up in hopes of qualifying for the 2022 Australian Junior Surfing Titles to be held in Queensland in December. The last Australian Junior Titles was actually held at Surfers Point back in 2019 and three years on, the prospects of competing against the very best surfers from the other surfing State’s seem high.

“Despite some testing conditions it was a great weekend of surfing all-round,” said Surfing WA Events Manager Justin Majeks. “For many kids this was their first time competing out there at Surfers Point, it can be an intimidating wave and I was super impressed by every grommet I saw paddle out through the keyhole.”

With the swell forecast to build throughout the weekend, the Under-12 Micro Groms were completed on Saturday, with Geraldton’s Cruz MacDonald setting his trajectory high, with his first ever State Title win now under his belt.

The nibble goofy footer looked in sync with the long running left’s on offer, locking in a near perfect 9.75 (from a possible 10), and backed it up with a 6.50 (from a possible 10), to finish on a combined total of 16.25 (from a possible 20). MacDonald edged out a determined Jasper Glossop (Busselton) in second, with Zenn Hammond (Gracetown) and Taylor Flynn (Cowaramup) rounding out the top four.

“I’m pretty pumped right now,” said MacDonald. “The waves have been really fun and I’m stoked to get my first win here at the State Titles – thanks to everyone especially my mum, dad and grandparents who are here supporting me.”

As ex tropical Cyclone Charlotte tracked south off the WA coast, it brought heavy rain Saturday afternoon and stirred up strong and gusty SE winds and a swell that built through the day on Sunday for finals.

“It’s been so fun and surfing Main Break with just us girls out there,” said Hardy. “That’s definitely some of the toughest conditions I can remember competing in, but I’m stoked with the win and I want to say well done to tall the girls in the final.”

Ace Flynn (Cowaramup) took the win in the Under-14 Groms Boys final, defeating an impressive group of young chargers who will surely shape the future of the sport in coming years. Flynn was challenged by Jack Bulloch (Secret Harbour), Kade Martin (Dunsborough) and Reef Lange (Margaret River), but his two-wave combined total of 11.85 (from a possible 20) was enough to secure the win.

“I’m not looking forward to surfing Trigg next,” joked Flynn. “But seriously I’ve loved every minute of the weekend and well done to the boys.”

The need for bigger boards and thicker leg ropes was evident, as the swell continued to pour in on Sunday. Living up to it’s reputation, Main Break delivered large and powerful waves throughout the day, as the blue-ribbon Under-18 and Under-16 Boys and Girls divisions impressed the locals and tourists who lined the natural amphitheatre, soaking up the action.

Brock Launders (Margaret River) was one of the form surfers of the weekend, taking out the blue ribbon Under-18 Junior Boys final. Launders’ powerful rail surfing was a delight to watch, finding some smooth rights to amass a combined total of 15.10 (from a possible 20), which included two seven-point plus rides.

Despite the best efforts of the ever-dangerous Otis North (Yallingup), Jake Hagan (Geraldton) and Sebastian Pellizzon (North Beach), Launders wasn’t going to let the title slip after not winning an event like this for quite a few years.

“I’m pretty stoked,” said Launders. “It’s been a long time between wins for me personally and I’m just glad that all the time I’ve been putting in out there has paid off for me.”

Denmark’s Isi Campbell confirmed that she’s a star on the rise, claiming victory in both the Under-16 Girls and Under-18 Girls divisions, displaying her cool under pressure to take out the weekend’s only double-victory.

Like Launders, Campbell credited her performance to her time spent in the water over the past months and thanked everyone who has supported her journey that will see her represent Australia at the ISA World Junior Championships in El Salvador later this year.

“I’m pretty exhausted, it was tough going out there,” said Campbell. “Both finals were super close and I thank the girls for pushing me all the way. Thanks to my mum and dad for putting up with me and always encouraging me.”

Maverick Wilson (Dunsborough) saved his best until the last, surfing with great style and flow to win a hotly contested Under-16 Cadet Boys final. Wilson showed his competition prowess, putting on a performance to be remembered, finishing  on a combined total of 18.25 (from a possible 20).

“I wanna be on tour one day and I felt really happy with my surfing today,” said Wilson. “I’m stoked with my scores and the surfing I put down.”

High performance surf coaches Mike McAuliffe and Mia McCarthy were at the event all weekend, providing on beach coaching for WA’s newest surfing generation. The coaches guided and mentored surfers and provided in depth venue analysis, heat strategies and all important post heat feedback for later reflection and future development.
“It was great to see such positive attitudes over the weekend from our group of kids,” said Mia McCarthy. “Even after a loss, they were all willing to come up and receive feedback, because as we know we actually learn more from our losses than our wins — so well done for that.”

Maverick Wilson (Dunsborough) was awarded the Creatures of Leisure ‘Little Legend’ Award for his classy performance  throughout the weekend and for posting the highest combined total of the weekend 18.25 (from a possible 20).

After a memorable start to the three event series, all attention now turns to the stop two which will head to Trigg Point, where the journey towards crowing the 2022 WA Junior Surfing Champions will continue in late May.