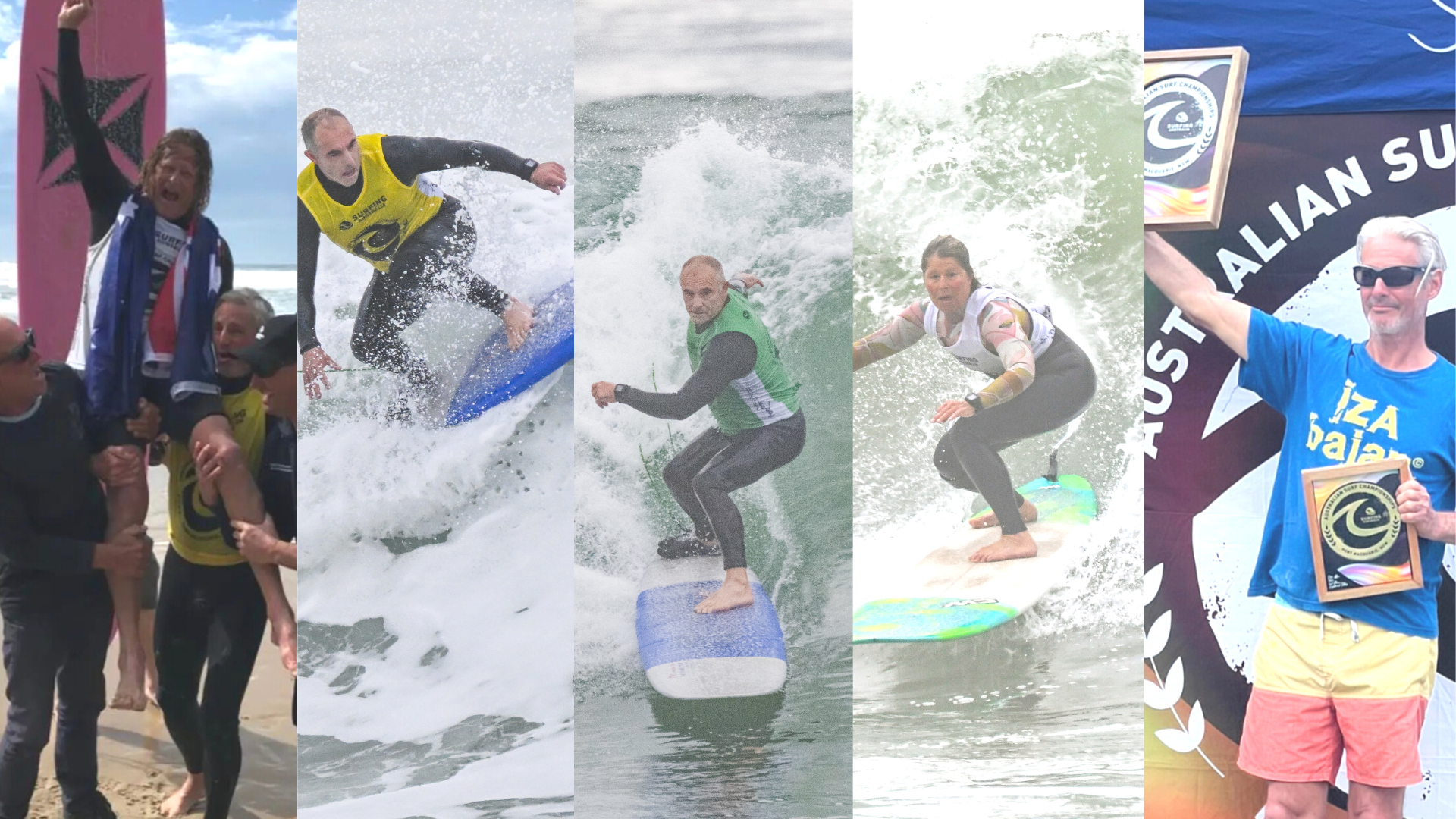 The Australian Longboard and Logger Open Championships have been completed after nine days of competition between Bonny Hills and North Haven beaches in Port Macquarie ahead of the Para Surf Championships starting tomorrow.*

The combined events crowned a total of 14 Longboard and six Logger champions in the first year of Australian Titles since 2019.

The Open Longboard and Logger divisions were completed last Friday (see previous release) ahead of the Under 18 and Over 40 divisions on the weekend. It was a history-making weekend for Sunshine Coast surfer Landen Smales.

At just 12-years-old he was the youngest ever winner of the Logger Australian Titles in 2019 and this year not only did he defend his crown, he also took out the Longboard division and, to top it off, was awarded a perfect heat score in the opening round of the Loggers.

A perfect heat total is rare in any surf division where two 10-point ride scores make up a perfect two-wave total. Contest Director Glen Elliot explained how it unfolded.

“A perfect heat score is extremely rare and the judges jealously guard a 10-point-ride as it is considered technically perfect,” he said.

“In the case of Landen Smales, his two waves could not be denied. A series of perfectly executed hang-ten nose-rides which were held in the critical sections of the wave with excellent positioning, grace and style. All are key criteria points for the Logger division.”

Landen was beyond stoked, not only for making history but because his brother Kaden told him he’d give him $10 for a 10-pointer. He earned himself $20 as well as two Australian Titles.

“The conditions were so good,” he said.

“A set wave came for the first wave and I got two long hang-ten’s after lining up the sections. I was pretty stoked to hear the score and then just thought, ‘I can do that again,’ and I did.

“I’m really happy to have got the double title and am grateful for the opportunity to surf against a great field of surfers from across the country.”

While Queensland dominated most of the weekend in the Open Men and Over 40’s, on the junior women’s side of the draw equal skill and style was emerging from NSW surfers and, like the men, most were qualified for both the Longboard and Logger divisions.

Jasmin Howarth (NSW), who also made the Longboard Semi Finals, was ecstatic to take out the Logger Title.

“I’ve been surfing since I could walk and I’ve always dreamed of winning an Australian Title but I never thought it would actually happen with so many talented surfers upcoming. So this is an amazing feeling to win,” she said.

“I love the grace and traditional style of the Log boards and I’m so glad they’re still appreciated and surfed by people of all ages.”

The masters of the sport took to the water from Monday and persevered through the week, many commenting on the camaraderie and community the event creates and supports. For the masters, the Championship event keeps their competitive spirit alive, gives them goals to work towards with their surfing and keeps them active year-round.

Friday was a glorious day for WA and Samantha Vanderford (WA) who travelled across the country to compete in the event and was a finalist in both the Over 40’s and 50’s as well as competing in the Over 50’s Shortboard division.

With an infectious energy on and off the beach Vanderford also had the second highest heat total (14.75) for the women across all masters divisions behind Over 60’s winner Peppie Simpson (QLD) who scored two near-perfect waves to combo her competitors in the finals to finish with an epic 17 two-wave total.

Vanderford applauded not only the community but Surfing Australia for the inclusion of the older women’s division.

“I now get to compete against women my own age, for older women in competitive surfing this is amazing. This is huge for us and we’re so stoked for this opportunity and to have such success this week.”

Jason Livingstone (NSW) 54, has been on the beach since he was four-years-old, that’s over half a decade in the water. He’s been competitively surfing for 15 years and is now back-to-back dual Australian Champion after winning both the Longboard and Logger in the Over 45 and 50’s in 2019 and 2022.

“I’m stoked,” he said after his second win of the day. “I only just made it through my semi. Today was a killer with a big rip, it was challenging getting out and you’re always checking over your shoulder with the level of other surfers out there at this event. It’s important to just get the right wave.”

“I just love surfing and being in this area, there are so many amazing waves,” said Livingstone.

The Over 70 Men’s final was inspirational for all. The Grand Kahuna’s Danny Bond (NSW), John Nolan (QLD), Earle Page (NSW) and John Amos (SA) not only had strong competition to contend with but are the epitome of the longevity of the sport. After a tough 20 minute final it was John Amos (SA) who is 73-years-young who claimed the glory for South Australia.

“I’m stoked to win in trying conditions and against wonderful highly-skilled competitors. Thank you Surfing Australia for all the hard work organising the event, the event embodies the spirit of surfing.”

The Australian Para Surf Championships will take place in Port Macquarie on Saturday 20th August with 27 competitors across five divisions.

The event was first held in 2016 and has grown in momentum over the period. A number of Australian and International Champions will contest this year’s national titles, one of the strongest draws yet, including the athletes who had success in the recent Hawaiian Adaptive Championships including Matt Formstrom (NSW), Sam Bloom (NSW), Mark ‘Mono’ Stewart (NSW) and Jocelyn Neumueller (SA).

Neumueller will contest her first Australian Championships but she’s no stranger to para-sporting excellence – she’s been a Para-Olympian and is a World Champion Para-Canoe athlete.

Jocelyn only has the function of one limb so she competes in the prone assist division.

“I love surfing because the ocean doesn’t discriminate. Once you’re on a wave you have the same capacity to ride the wave as anyone else. Your functionality on land is irrelevant, the water is the most amazing leveller, it brings equality,” she said.

“Once you’re on a wave, it’s an equal playing field and that’s what makes it so special.”

With another southerly swell pulse coming through she’s looking forward to the competition.

“It looks like it will be a decent swell, which I love,” she said.

Why is it so important for the Para Surfing Titles to lineup alongside the Shortboard, Longboard, Logger and Bodyboard Titles? Jocelyn says it’s simple, you can be what you can see.

“The more people know about the sport and the access to it, the more people get involved. It’s really important to have visibility alongside able-body titles to show what’s possible, that surfing can offer something for everyone. It provides so much purpose, fitness and a supportive community.”

The Australian Para Surf Championships location will be decided on Saturday morning.

The Australian Bodyboard Championships will run Sunday 21st and Monday 22nd August and will conclude the 17-day event.