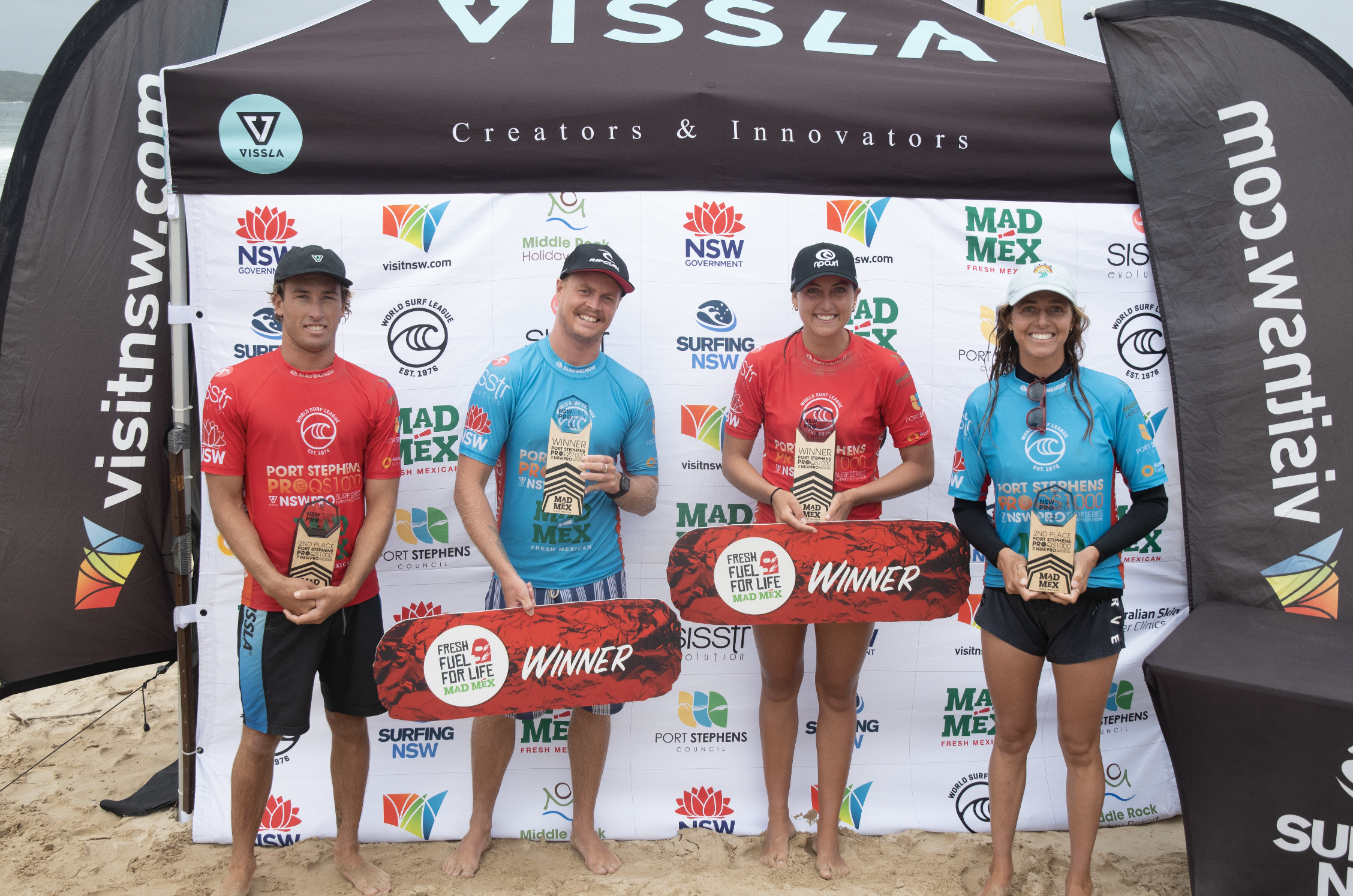 Fresh off a fifth-place finish at the recent Great Lakes Pro, Jackson Baker came into the Port Stephens QS1,000 with one thing in mind and that was a win. With a previous record of three QS wins from three QS finals, odds suggested that all the Novacastian powerhouse had to do was make it to the last heat of the day, so that’s what he did. In the final, Baker came up against the form surfer of 2021 Jordan Lawler in what was set to be a blockbuster and the pair didn’t disappoint. Lawler was unable to conjure the form he showed earlier in the day while Baker posted an excellent two-wave total of 16.70 to claim his fourth QS victory.

“Four wins from four finals feels pretty good,” Baker said. “But I think it just adds more pressure for the future if I make a final. It’s been such a great couple of weeks to be back competing. I started working last year and got a dose of the real world so I feel really fortunate to be back in competitive surfing as I think everyone around here is. It’s been a good start to the year and I hope to keep the momentum going especially ahead of my wildcard entry into the Championship Tour event at home in Newcastle. That’s the main goal I’m working towards along with Challenger Series qualification.”

After solid results at last week’s Great Lakes Pro, Kobie Enright and Philippa Anderson had the momentum to hold onto when the QS landed in Port Stephens. Each competitor tore through the draw all the way to the final where the pair met and went head-to-head. Enright started the heat strongly, posting an excellent 8.17 on her first ride. She immediately backed it up with a further demonstration of her powerful frontside hacks, leaving Anderson to chase down the lead. Although Anderson posted an excellent score of her own, she was unable to back it up leaving Enright to take the second QS victory of her young career. Kobie will now head to the Mad Mex Maroubra Pro, a place she has tasted victory before, sitting 14th on the rankings.

“I was just super happy to make it to the final so than to win feels amazing,” Enright said. “My last full season of competing was pretty rough and I wasn’t feeling all that confident in my ability so to come back and have a win this early in the year is just the confidence boost I needed so I’m super stoked. Last year was good for me because it was the time away from competing I needed. I got to fall in love with surfing again and enjoy all of this like I used to. It’s been an awesome event getting to surf such a great point break like this — I’m from a right-hand point so definitely feel comfortable out there. I’m looking forward to heading to Maroubra with a win under my belt and having that confidence.”

Regardless of her second-place finish today, QS standout Philippa Anderson looks poised for success in 2021, already cementing herself in third position on the rankings with a second and third-place finish in consecutive events in 2021. Anderson will now shift her focus to Maroubra, a place she has also won at, back in 2019.

“My goal coming into this season was to finish every event on Finals Day and I’ve done that so far so I’m happy with that,” Anderson said. I’ve had a third and a second which means the next should be a win so I’ll work towards that. Now we are off to Maroubra which is good — it’s a place I’m familiar with, have had a win at and is similar to my home beach so am always confident heading there so hopefully I can make the final again and take the win.”

After finishing in the runner-up position at the recent Great Lakes Pro, Narrabeen stalwart and perennial QS standout Jordy Lawler went hell-for-leather in his attempt to go one spot further at Port Stephens. Lawler put on a dominant display of surfing over the duration of the event, consistently posting scores in the excellent range for an array of stylish backside cracks; even claiming the highest two-wave heat total of the event in the semis, 18.50 (out of a possible 20 points). However, he found himself on the back-foot in the final against Baker and was unable to replicate the same form he showed one heat earlier. He’ll now go into the Mad Mex Maroubra Pro looking to cement the top spot on the dais.

“I’m pretty bummed after that final, to be honest,” said Lawler. “I just felt like I was in a bad rhythm and I couldn’t find the waves I was after. I wish I could have really stuck it to Jacko, get good waves and just put on a bit of a show, but I just got stuck on average waves and he outsurfed me. That being said, I’m still happy to make another final, but Jacko just out-surfed me.”

Special mention must go to India Robinson, Liam O’Brien, Dakoda Walters and Kalani Ball who all went down in the Quarter and Semifinals. Although they were unable to clinch QS victories all surfers put on impressive performances and notched up a handful of excellent scores over the duration of their campaigns.

The Vissla NSW Pro Surf Series and the WSL QS will now head south to Maroubra for the Mad Mex Maroubra Pro from the 26th – 28th February 2021.

The Port Stephens Pro pres. by Mad Mex, stop 2 on the 2021 Australian Qualifying Series leg will run from February 21 to 23. Head to www.worldsurfleague.com or the free WSL App for more information and to watch the event LIVE.