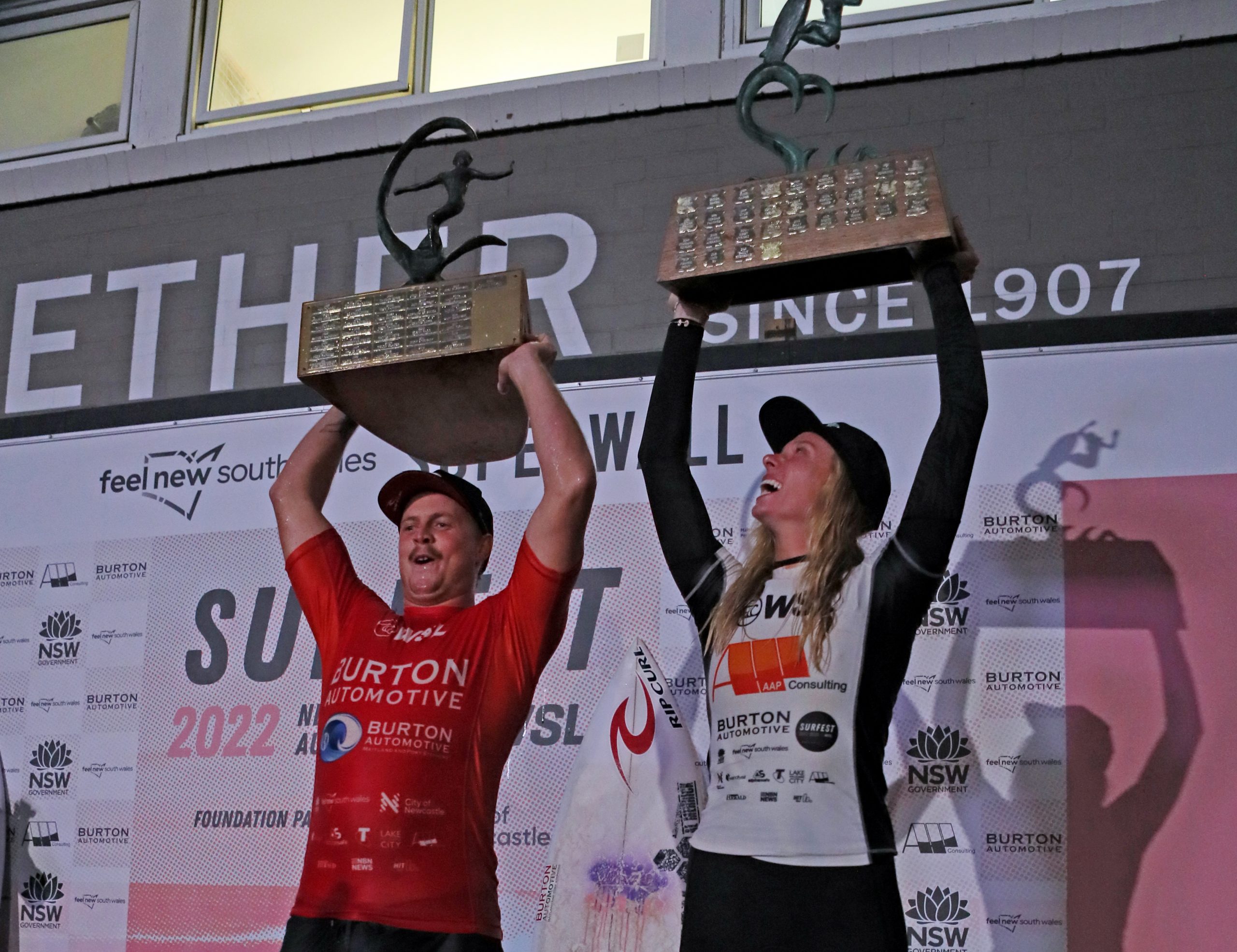 In its 36th year of running, Jackson Baker has become the first Novacastrian male to hoist the ‘Mark Richards Trophy’ above their head at Newcastle Surfest, beating names like Luke Egan, Matt Hoy and Ryan Callinan to name a few, in claiming the feat. The 2022 Championship Tour Rookie surfed with incredible confidence all through the event, consistently posting high scores in every heat with the judges rewarding his trademark power hacks and impeccable wave choice. Baker saved his best performance until the Final however, posting the highest two-wave total of the entire event, a 15.50 (out of a possible 20) to claim the biggest victory of his career.

“To win this event on home turf and be able to dedicate it to my mum and repay the people who put this thing on every year feels amazing,” Baker said. “To have my biggest win and MR (Mark Richards) be on the trophy is crazy. I had to think a lot about doing this event but thought it would be a good warm up for Bells and a few of those waves were quite Bells-like so I want to head down there with this confidence and make the cut and bring on the rest of the year. This win means so much to me, my family and my community so I couldn’t be happier.”

In the Final, Baker overcame former CT competitor and professional surfing veteran Nathan Hedge who at 42, put on an inspirational performance to finish second, and only miss CS qualification by one spot. Local hero and CT surfer Ryan Callinan finished third with Billy Stairmand from New Zealand finishing fourth.

After falling off the elite Championship Tour at the end of 2021, Macy Callaghan came into this year’s regional Qualifying Series unsure of which direction her career might take. After a win at the Central Coast Pro then backing it up here at Newcastle with another win, Callaghan will be off to the Challenger Series as the regional top seed as she looks to re-qualify for the dream tour. In the Final, Callaghan surfed the perfect heat, only catching two-waves to post a solid heat total of 14.84 (out of a possible 20) to overcome South Africa’s Sarah Baum who now resides in Newcastle along with Kiwi Paige Hareb and Hollie Williams who each locked themselves in a spot on the Challenger Series.

“I feel like I’ve put in a lot of hard work over the years and to see it come back to me with two wins feels amazing,” Callaghan said. “Especially that they’re both so close to my home – that’s really special. I’ve been competing at Surfest since I was 15. I won the cadet cup back then, then I won my first Pro Junior and now this – Newcastle has been good to me. This is a great way to finish the QS season and I’m looking forward to heading into the Challenger Series feeling positive and keen to give it a good go.”

Being the final event of the Australia / Oceania regional Qualifying Series and offering 5000 points, the City of Newcastle Pro and AAP Consulting Women’s Pro presented by Burton Automotive decided which surfers would represent the region on this year’s Challenger Series. It was a stressful yet exciting week for all competitors with nine men’s spots and seven women’s spots up for grabs along with a men’s and women’s regional wildcard. At the end of competition today the Australia / Oceania Challenger Series qualifiers are as below.