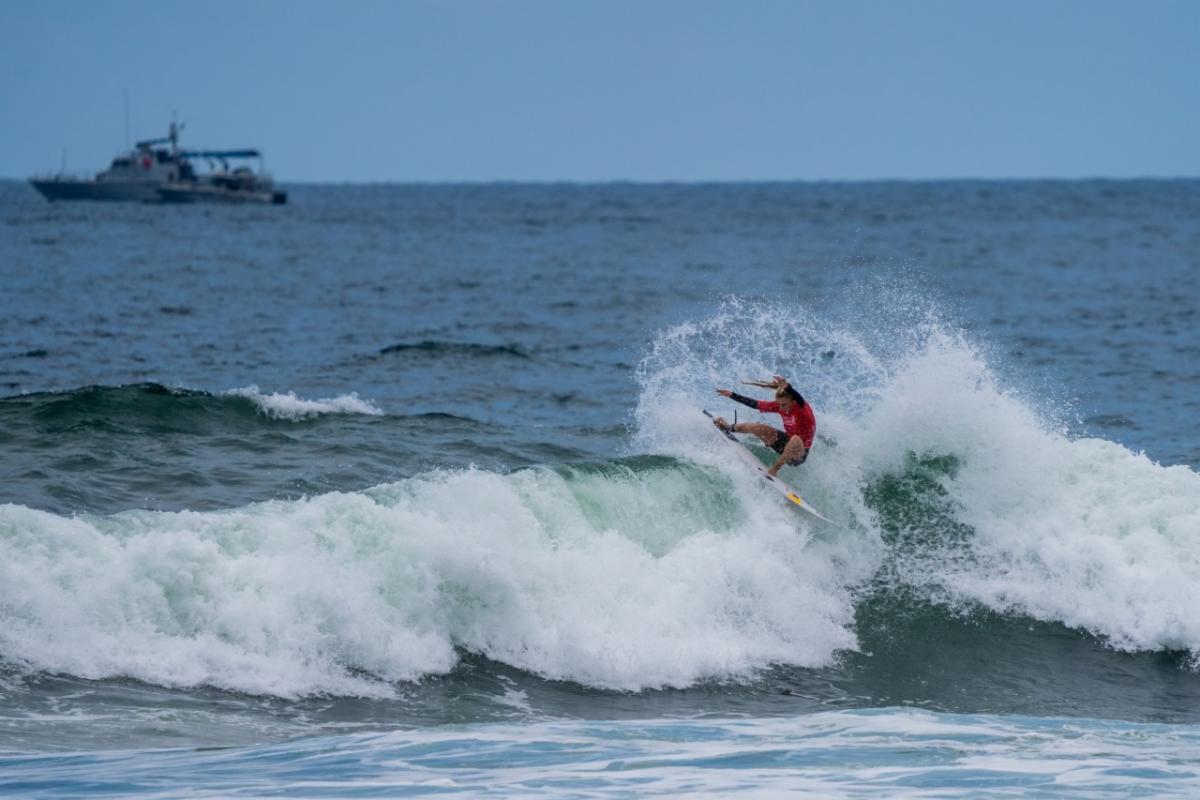 For the majority of the day Girls U-16 heats were held at the right point of El Sunzal, while Boys U-18 surfed the peak of La Bocana. Late in the day the first four heats of Round 1 of Boys U-16 were held at El Sunzal.

Big wins in the Girls U-16 division came from rising stars Erin Brooks (CAN) and Sierra Kerr (AUS), however it was Mirai Ikeda (JPN) who set the field ablaze, amassing both the highest heat total (15.10) and single highest wave score (7.77) of the day.

The best of the Boys U-18 came from Lukas Owston (USA), whose pair of 8’s delivered an excellent heat total of 16.67, while Keoni Lasa (VEN) hung onto the highest single wave score of a 9.33 for a seamless three-turn backhand combo on La Bocana’s lesser-surfed right.

Of the four U-16 Boys heats, it was the final heat of the day that saw Axel Dominguez (FRA) collect a couple 7’s for a 14.17 total, the highest of his division so far.

Thanks to the double elimination repechage format, no surfers have been eliminated in the event. Athletes that lost in their main event heats today will get a second chance to advance when the repechage rounds hit the water.

13-year-old Mya Kuzmovich (PUR) was extremely excited to scrape through her Girls U-16 heat after a buzzer beater shot her from fourth place to an advancing position in the main event. The Puerto Rican learned to surf at the age of 2 and has been competing since she was 9.

“So far this ISA event has been a dream come true for me and I’m so happy that I can experience it with the people that I love the most. The waves are firing so I just can’t wait for my next heat!”

Luke Swanson (HAW) made his intentions clear early on, easily winning his heat despite a slow start. In his post-heat interview he declared, “I want to win. I think that I have everything I need to win and I’m feeling confident.”

Working with Swanson and the rest of Team Hawaii is Shane Dorian. A former ISA World Junior Championship competitor, Dorian shared his thoughts on the event, “It was an amazing experience for me personally. Surfing in the ISA World Juniors was very formative. I wasn’t a very good amateur surfer but it gave me the fire to pour all my energy into surfing.”

“It’s an incredibly diverse event. It’s so fun to meet the other teams and find out what they’re all about and where they’re from. It’s really fun. I feel like we all just have so much in common, even though we’re from so many different places and we may look different or whatever the deal is. But it’s really great to know that we’re all the same and we all have surfing in common and it brings us all together, so it’s awesome.”

Senegal is one of four teams competing in the ISA World Junior Championship for the first time. Team member and 2018 ISA Scholarship Ambassador Birame Gueye is ecstatic to be in El Salvador for his first international trip and ISA competition at the age of 17.

“I grew up in a fishing village. My uncle saw people surfing at our local beach and it inspired him to learn. I asked him if I could borrow his boards and quickly realized that I enjoyed it. This allowed me to develop my surfing. I worked hard to get myself selected to be in the national team. I’m very happy to be able to compete here with my brother Djibril and to represent Senegal.”

“It’s awesome to see the world’s best juniors back at it after so long away from international competition.

“Seeing everyone together again, their smiling faces connecting across culture and language barriers with our common love of surfing is the reason I have given up so many thousands of waves in service to the ISA.

“We know from experience that amongst the more than 400 surfers here in El Salvador are future Olympians, World Champions, and legends of the sport. It’s so special for me to be able to feel their youthful energy again and to watch them become the future of our sport.”