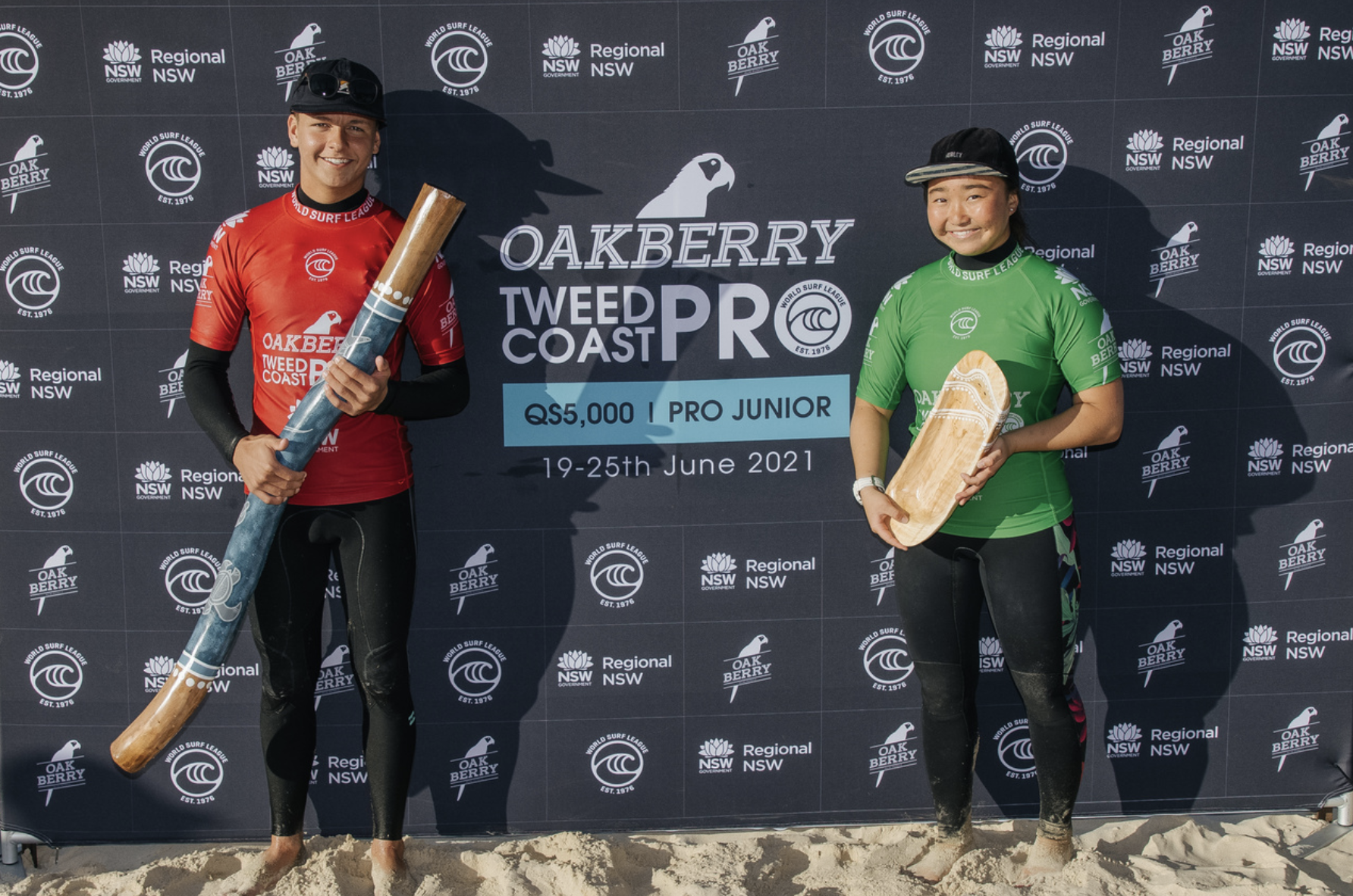 Cabarita, NSW/AUS (Sunday, June 20, 2021) – Lennix Smith and Sai Maniwahave taken epic wins at the Oakeberry Tweed Coast Pro Junior today in clean two-to-three foot surf at Cabarita Beach. The pair had to overcome a massive field of Australia’s best up and coming competitive surfers in the first WSL Pro Junior event the country has seen in over 12 months.

In what was his first ever World Surf League event appearance, Lennix Smith took the biggest win of his young career with this victory at Oakberry Tweed Coat Pro Junior today. The 16-year-old Woolangong surfer may have been feeling the nerves of competing in his first ever professional event but it didn’t show as he tore through the field, even posting the second highest heat total of the day in his Semifinal appearance.

“This is my first ever WSL event so I was so nervous all week,” Smith said. “I never thought I’d be in this position today so I’m really happy. I spend a bit of time up here training, so I surf in this zone a bit and enjoy it here. I’ve been competing in state and ‘grom’ comps with all of these guys my whole life so it was cool to compete in a Final with them today. It’s been a sick weekend but now It’s time to focus on the Skullcandy Ozgrom Comp Pro Junior in a few weeks at Lennox.”

To take the win, Smith took down Tweed Coast local Marlon Harrison who finished runner-up, Ty Richardson who finished in third with Touma Cameron in fourth place. The final was anybody’s with all four surfers dominating their Semi and Quarterfinal heats earlier in the day.

Sai Maniwa was a standout all event, posting the highest two-wave combination on Day 1 then cruising through Day 2 day to lock herself a spot in the finals in what was the first time she had ever surfed in Cabarita. Hailing from Japan, Maniwa and her family relocated to the Gold Coast two years ago to focus on her surfing and today it paid dividends with the powerful natural footer taking the first win of her career. Sai will hope to continue her ominous run of form as she now shifts her focus to the QS5,000 event which is set to commence tomorrow here at Cabarita Beach.

“I’m so happy with this win,” Maniwa said. “There are so many people including my family, my trainer, my coach and many others that have shown me so much support so I feel like this has paid off for all of us with this win. I have only done a few junior events so I feel fortunate to take first place already. I live at Kirra now with my family and go to high school on the Gold Coast but I have never surfed here before — I will be coming back because it is very special to me now and it is a beautiful place with great waves and lovely people. This is definitely a confidence booster for me before the QS event tomorrow — I’m so excited to compete again this week here on the Tweed Coast.”

In the Final, Maniwa had the tough task of overcoming other form surfers Ellie Harrison and Cabarita standout Zahli Kelly who both had solid scores in the bank with only 0.35 of a point separating first second and third. Phillip Island’s Sage Goldsbury rounded out the final in fourth position in what was her second JQS finals appearance.

Be sure to check back in tomorrow as competition commences for the Oakberry Tweed Coast Pro Qualifying Series 5000 event. The event will run until Friday and see Australia and New Zealand’s best up and coming competitors jousting for a spot on the WSL Challenger Series, the gateway to the elite Championship Tour.

The 2021 Oakberry Tweed Coast Pro QS5,000 and Pro Junior Events are set to run on the Tweed Coast from June 19 – 25. For more information on the event head to www.worldsurfleague.com or download the Free WSL App.