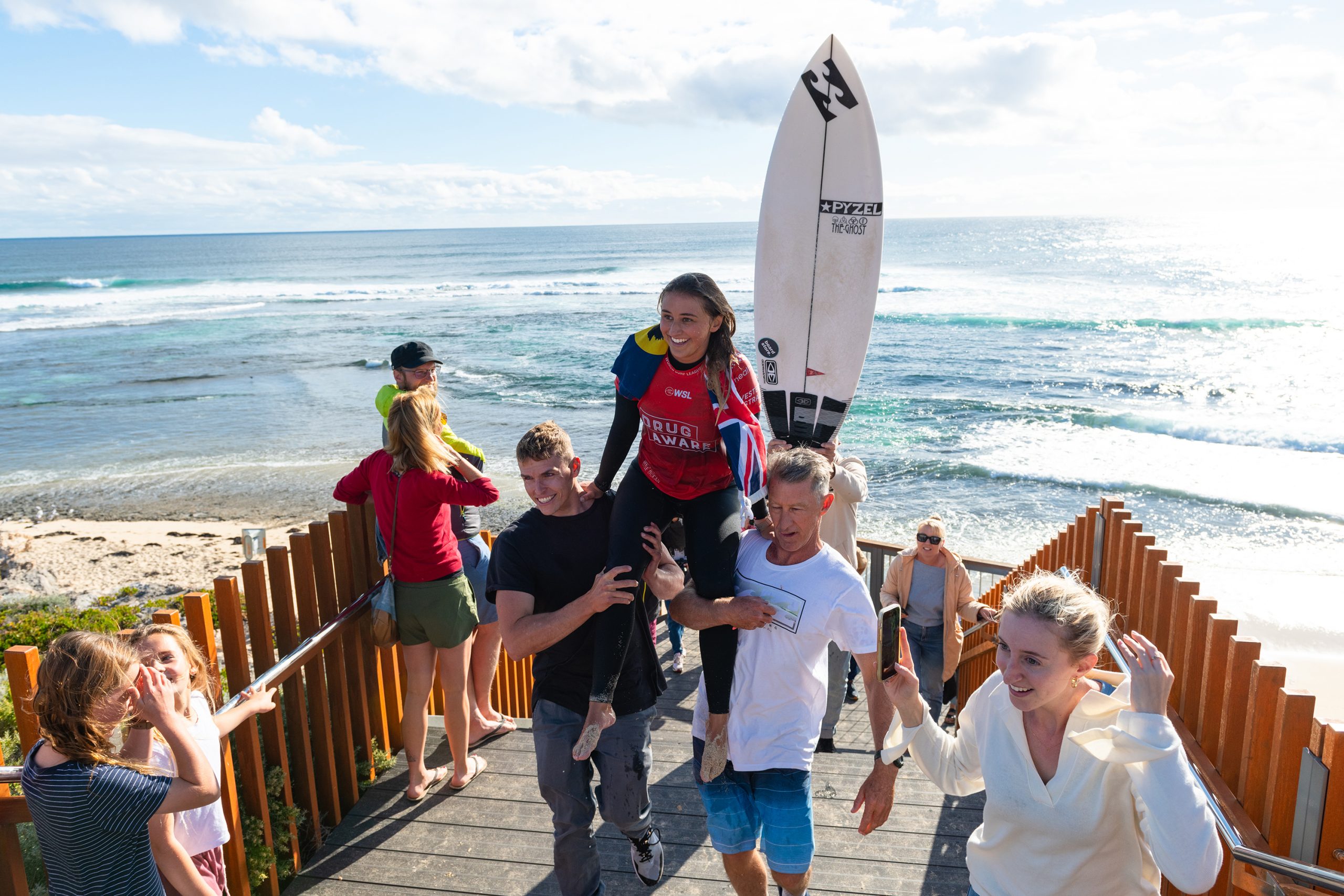 Classic autumn conditions prevailed all day long as clean and groomed swells in the 5-6 feet range provided ample opportunity for big scores, as 24 surfers (12 males and 12 females) were whittled down to just two, who are now set take on the world’s best surfers on home soil.

Ben Spence (Margaret River) looked unstoppable and qualified for his maiden Championship Tour event after an impressive run on the WSL Qualifying Series (QS) events over the past two months on the East Coast.

“These are some of the best surfers in WA and this is my biggest win ever,” said Spence. “I haven’t had big results in my time in surfing, but that’s why I kept at it, for the hunger and for moments like this.”

Spence will likely face off with defending Margaret River Pro champion and new WSL ratings leader Filipe Toledo (Brasil) in the opening round of competition. Spence joins an impressive list of local Margaret River surfers to compete in the main event of the Pro as a wildcard including, Jack Robinson, Jacob Willcox and Cyrus Cox in recent years.

On the Women’s side of the draw, Mia McCarthy (Cowaramup) claimed the final spot in the event and will be preparing to surf in her second Margaret River Pro event, after last winning the Drug Aware Trials back in 2019.

“Growing up in Margaret River has always been something so special to me and I just love surfing the waves here,” said McCarthy. “All the locals are so awesome and it’s great to be able to represent Margaret River in the main event.”

McCarthy took down last year’s Drug Aware WA Trials winner Willow Hardy (Margaret River) on her way to victory and will face off against one of the best performing females at Margaret River in Carissa Moore (Hawaii), when competition gets underway.

Acting as the official curtain raiser to a thrilling two weeks of professional surfing in Western Australia, The Drug Aware WA Trials will take place at Surfers Point, Margaret River and will feature 12 of the best males and 12 of the finest female surfers in the State, all vying for that precious spot into the main event of the Margaret River Pro.

Surfers were invited to compete based on their performances over the past 12 months, with the trialists a mixture of local boardrider club champions, state champions, national champions, specialty event winners, as well the highest rated WA surfers from the WSL Qualifying Series (QS).

The Drug Aware WA Trials provides an unparalleled opportunity for local surfers to compete against the world’s best surfers. The 36th Margaret River Pro, the fifth stop on the World Surf League (WSL) Championship Tour (CT), will be held from 24th April to the 4th May 2022 at Surfers Point.

Drug Aware was established in 1996 and is the only comprehensive, on-going government program on illicit drug education (outside of schools) undertaken in Australia.

Drug Aware is one of the key initiatives in the state framework of educational strategies forming part of a comprehensive approach to address illicit drug use in Western Australia. The program aims to prevent, delay and reduce drug use and related harm, by providing credible and evidence-based information to Western Australians, to help them make informed decisions about their drug use and related behaviour.

Results from the Drug Aware WA Trails can be followed via www.surfingwalive.com.au or for more information on this or any other WA event be sure to log onto www.surfingwa.com.au

Further information on the Margaret River Pro can be found at: www.worldsurfleague.com

About Drug Aware:
Drug Aware has been delivering these messages across the state since 1996. Drug Aware was established as part of a state framework of educational strategies designed to address illicit drug use among young people in Western Australia. It is the first comprehensive ongoing program on illicit drug education undertaken in Australia. The program seeks to provide honest, credible and evidence-based information to young people in order to help them make informed decisions. www.drugaware.com.au