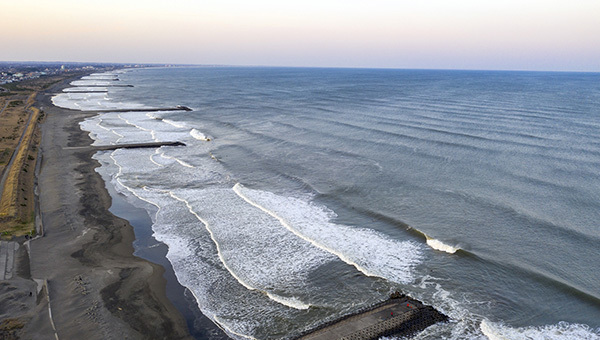 After being postponed last summer due to the pandemic, the 2020 Tokyo Summer Olympic Games’ surfing competition will commence at Shidashita Beach. “Shida” is one of Japan’s most popular beaches and one of the closest surf spots to Tokyo — with a series of groins and shifty beachbreak peaks waiting a mere 60-mile ride from the megalopolis across the Chiba Peninsula.

While the Olympic Games have come to Japan during its slower months for surf, this is also when tropical activity picks up in the Northwest Pacific. Surfline’s Forecast Team was integral in helping select Shida as the site of the inaugural surfing event — here’s what our research uncovered:

Located in the mid-latitudes on the eastern coast of Japan, this region faces many of the same challenges as the East Coast of North America. The predominant extratropical storm track is west to east, with storms moving offshore and away from the region, which can significantly limit the amount of swell the storms send back. Northerly swell events occur primarily in winter, and are much less frequent during the summer months when this storm track is at its slowest. That leaves trade swell and tropical systems like typhoons as the primary sources of surf during summer.

Summer trade swell is associated with winds that blow clockwise around high pressure residing over the North-Central Pacific. This pattern develops shorter-period E/SE swell. Lower pressure inland (west or south of the region) can interact with offshore high pressure, setting up periods of enhanced SE to S (and occasionally SW) windswell events for exposed breaks on the Chiba Peninsula.

Tropical cyclones, called “typhoons” in this part of the world, provide the greatest potential for significant swell in the Chiba region during summer. The Northwest Pacific is the most tropically active basin on the planet, boasting the only season that runs year-round, but usually the greatest activity will occur between June and October. Moving through the event window, the potential for tropical swell increases, with August traditionally being the most active month of the year. Originating in the lower latitudes, these tropical systems often track westward and underneath the Pacific high pressure, enhancing winds that produce E/SE swell even if they don’t develop into a named storm.

Depending on the position and strength of the North Pacific high pressure, tropical systems can track anywhere from well south of Japan and heading westward, or curving northward and passing close to or even making landfall in Japan. These systems can send swell from easterly through more southerly directions if they track west — and from more northerly angles once they curve and lift past the region. Recurving storms often deliver a stronger, mixed-direction swell, but bring the risk of adverse wind and weather. Landfalling systems can be a concern, but they are often in a weakening state as they near the region.

Shida’s swell window is open to NE through SE-angled swells, from roughly 47 to 130 degrees. Cape Inubo to the north blocks swells coming from less than 47 degrees. Cape Hachiman to the south blocks southerly wind and plays a significant role in the shadowing of S swells. Due to shallow water offshore, however, longer-period SSE swells between 130 and 165 degrees can wrap in some of their energy.