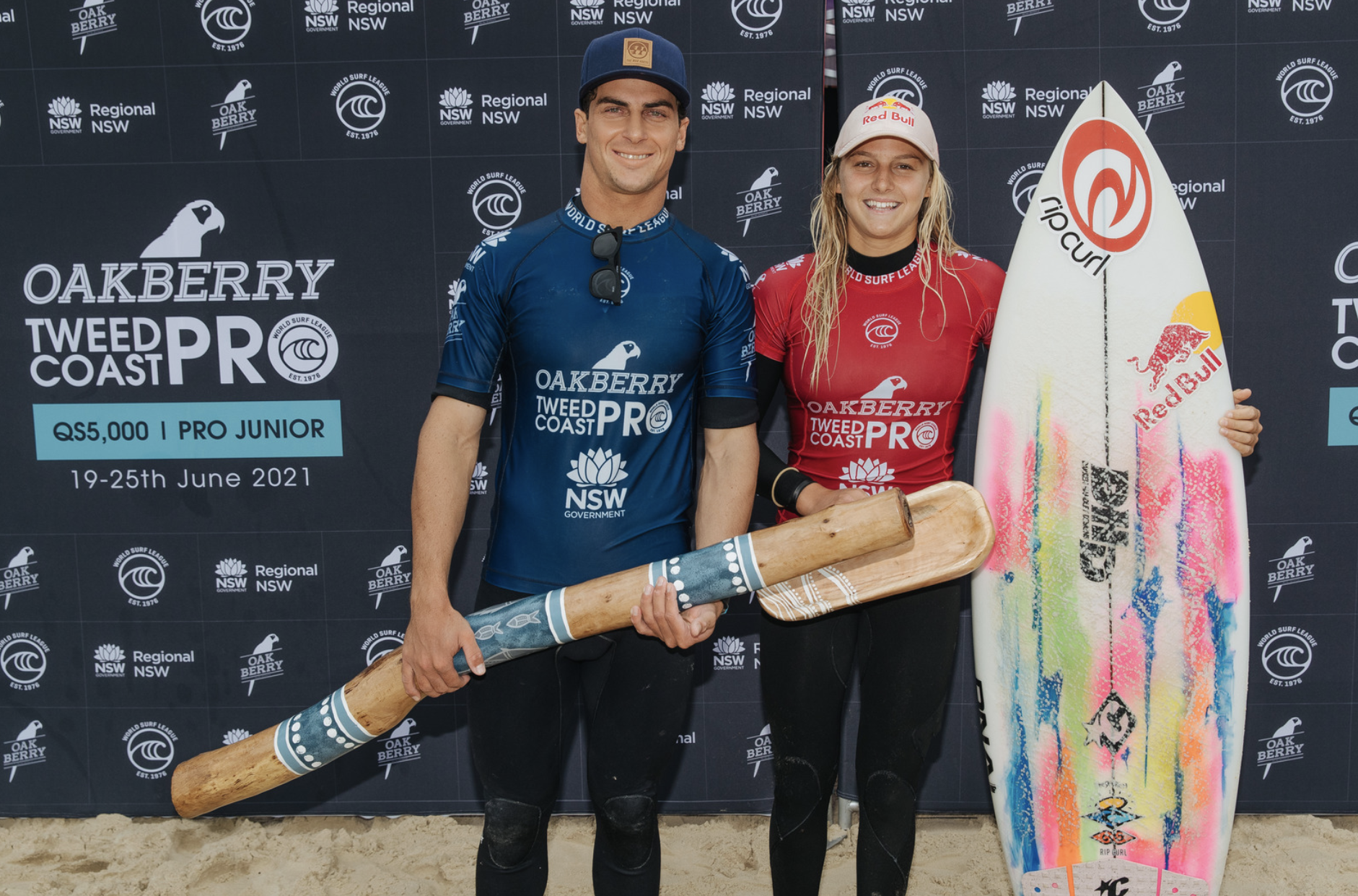 Cabarita, NSW/AUS (Friday, June 25, 2021) –Molly Picklum and Callum Robson have claimed the biggest victories of their careers at the Oakberry Tweed Coast Pro Qualifying Series 5,000 event in tricky two foot conditions at Cabarita Beach. With Challenger Series qualification on the line, the stakes were high for a number of surfers which added to the drama on an already action-packed finals day.

The women’s Final saw two of Australia’s most promising young talents go toe-to-toe with eventual winner Molly Picklum coming up against Cabarita local Zahli Kelly in a battle that is sure to continue for years to come. Picklum came into the event as the second-highest seed and performed well all week but saved her best performance until last, winning the heat with an excellent two-wave total of 17.10. Picklum’s powerful rail game and smooth transitions between turns was rewarded by the judges as the 18-year-old Central Coaster earned the highest two-wave combination of the women’s event in the final. Picklum will finish the season in top spot on the regional rankings and now shift her focus to CT qualification through the Challenger Series.

“I’m over the moon,” Picklum said. “I had a bit of a rusty start to the heat but was able to refocus on the little fine details then reset and go at it. When I struggled a little bit at the start I focussed on not getting down on myself because it’s surfing and anything can happen. Once I felt like I had reset I still had 15 minutes left which was plenty of time to get my feet in the wax and find a rhythm. Now it’s time for the Challenger Series, I just want to hold onto this confidence and form for the second half of the year. ”

Evans Head competitor Callum Robson came into the Oakberry Tweed Coast Pro sitting at 19 on the Australia / Oceania Regional QS Rankings and in need of a solid result at Cabarita if he wanted to find himself a spot on the CS in 2021. The pressure never seemed to phase the powerful young natural-footer as he carved through the field to set up his first QS final against good mate Mitch Parkinson. In the Final, Robson continued his form, never looking in doubt as he built towards his winning total of 12.94 and moved from 19th to 4th on the rankings.

“This has been such an incredible week with so many different emotions,” Robson said. “From getting here and being so focused on the Challenger Series to then realising I was locked in and refocusing on looking to win, I’ve been so happy with my performance all round here at Cabarita. It was awesome to share a final with Mitch. We surf a lot with each other and he has been on fire here so I was definitely nervous coming up against him. I’m looking forward to seeing how I go on the CS now against all the best internationals.”

Although local surfer Zahli Kelly wasn’t able to get the job done in the final, her performance all week was impressive, with the teenager locking herself in at 4th on the Australia / Oceania QS Rankings and with that, a spot on the Challenger Series.

“It has been a really cool experience competing in an event of this size at my home break,” Kelly said. “It’s felt like my normal routine each day coming down here to freesurf but I end up surfing heats. This is definitely the best QS result I’ve had so I’m really happy with how I’ve performed. I now have to work out if I’m going to compete in the Challenger Series or focus on my last few school exams so a few big decisions have to be made.”

Regardless of his struggle to find two waves of substance in the Final, Coolangatta’s Mitch Parkinson was a clear standout on Finals Day, posting the highest single wave score and two-wave combination of the entire event in his Semifinal matchup. Parkison put on an air-reverse clinic to earn a near-perfect 9.87 and heat total of 17.10 on his way to the final. A week ago, Parkison wasn’t even entered in the event and was sitting in 52nd spot on the rankings. Today, he sits at 14th and just outside of the qualification bubble, giving him a great seed for next season’s regional QS.

“It’s cool to think I entered late to just see how I would go and am now standing here on the podium,” Parkinson said. “It’s been a fun week and to finish it off in the Final with Callum was awesome. I’ve watched him develop over the last few years and he is such a great surfer so to see him here today is awesome. I’m not sure what this result means for me — maybe I should reconsider the QS — I’m not sure. I’m just going to enjoy today for now.”

With 5,000 points on offer at the Oakberry Tweed Coast Pro it was the biggest and final opportunity this season for competitors to grab a spot in the Challenger Series to be held later this year. From the Australia / Oceania region, the top 10 men and top 8 women will be allocated a spot on the global series.

On the men’s side Kalani Ball, event winner Robson and New Zealand’s Billy Stairmand were able to move up into the top 10 while Mitch Crews, Kehu Butler and Dakoda Walters were all knocked out.

The women’s top 8 didn’t change but there was some movement meaning the seeding some surfers will take to the challenger series improved whilst some have made things a little harder for themselves in the back half of 2021.

The 2021 Oakberry Tweed Coast Pro QS5,000 and Pro Junior Events ran on the Tweed Coast from June 19 – 25. For more information on the event head to www.worldsurfleague.com or download the Free WSL App.