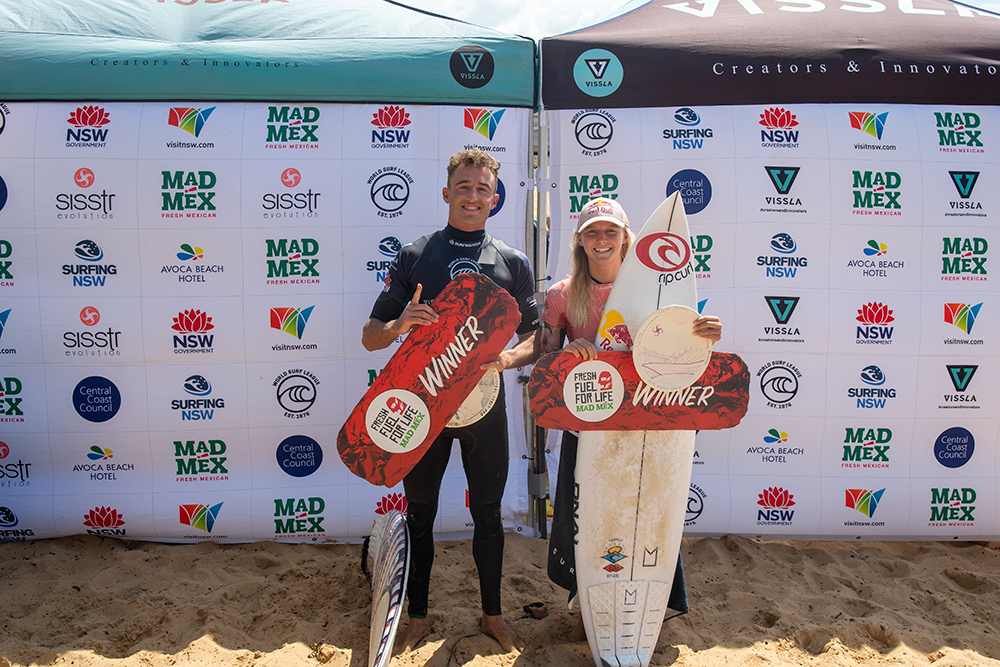 A strong local crowd enjoyed the women’s final with two Central Coast locals clashing and in a close and high scoring final that saw multiple lead changes, it was Picklum who secured the win with two strong rides of a 7.53 and 7.43 and a final total of 14.96 defeating Macy Callaghan on 14.74.

This was a victory full of merit for 18-year-old Picklum having defeated perennial World Title contender Sally Fitzgibbons in the semi-finals along with Championship Tour surfer Callaghan in the final.

“I feel great right now, it’s been so exciting surfing against Championship Tour surfers like Macy and Sally and to win in front of my home crowd is just the best,” said Picklum.

Macy Callaghan’s runner-up result was also a good warm up for her upcoming Championship Tour events as she sets her goals this season on a top ten global ranking.

“I’m hurting a little right now by not winning but I’m also satisfied making the final,” said Callaghan. “This was a great warm up leading into the CT event at Newcastle and it’s also great for two Central Coast surfers to make the final. Molly’s very talented and has a great future.”

Sally Fitzgibbons and Freya Prumm both finished the event in equal third going down in their semis to Picklum and Callaghan respectively.

The Vissla Central Coast Pro final saw West Australia’s Jacob Willcox open in the first minute with a strong 7.4 ride which set him up to control most of the final, but the determination of the defending event champion Matt Banting shone through when the Port Macquarie former Championship Tour surfer found a wave in the final two minutes which required a high score and he delivered with a 7.9 to take the win.

“That was an amazing final and I knew I had to fight hard to get ahead of Willcox after he opened so well,” said Banting. ”The final wave lined up nicely for me and I just had to push hard because I knew I needed a close to excellent score. It’s a fantastic feeling to win here again.”

WA’s Jacob Willcox felt right at home in the waves at this event and today’s runner-up result sets his season up very well.

“I would have loved to have won obviously but that’s the way it goes sometimes. It’s been a great event and the waves have been fantastic so I’m happy,” said Willcox.

Equal third placings went to Reef Heazlewood who went down to Banting in a very close semi final while Byron Bay emerging talent Kyuss King went down to Willcox in an equally close semi.

WSL professional surfing will now look forward to the WSL Championship Tour kicking off at nearby Merewether Beach in Newcastle on April 1st.