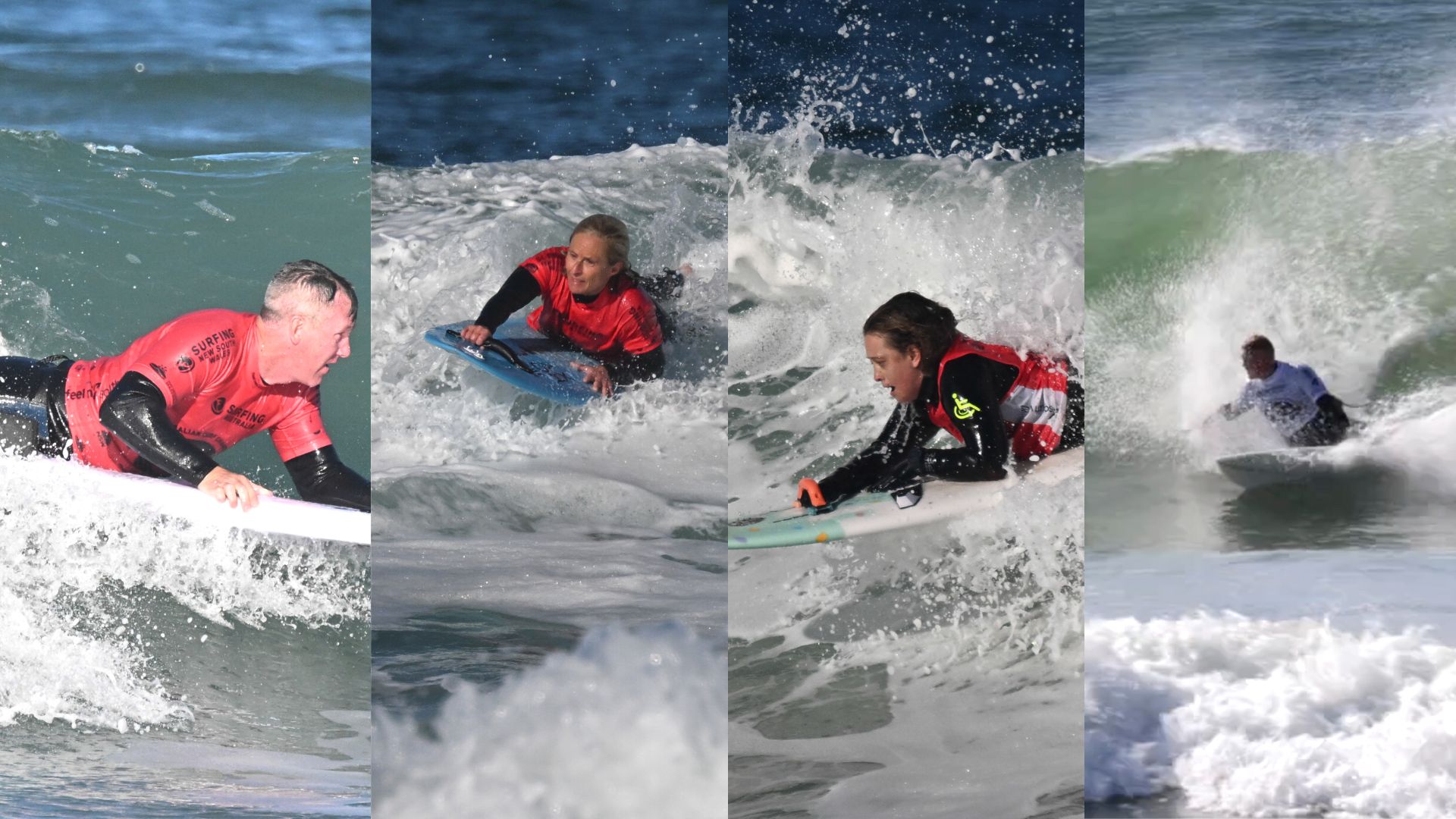 The swell continued its challenging run, serving up four-foot sets that pushed the para athletes to new heights and highlighted their clear ability to surf and dominate in the lineup.

Sam Bloom (NSW), 51, had a convincing win over Victoria Pendergast (NSW) in the two-round finals. She won the first heat but in the second trailed until the last five minutes when she wowed the judges and was awarded perfect 10’s across the board.

As a spinal cord injury paraplegic, Bloom has no use of her legs and uses her arms to pivot and turn on the waves.

“It was challenging out there today, it just didn’t stop. It was insane but amazing,” said Bloom after her win.

“I was so lucky to get this wave at the last minute. It was a good wave with a solid wall so I could get a couple of big turns. I dug my arm in and made the most of it.”

“I’m so stoked! It’s amazing to be able to surf as part of the Australian Surf Championships,” she said.

“For all the para surfers, we’ve overcome so many challenges and it means a lot to have this opportunity to compete and there are so many more people this year, it’s really gaining momentum. It’s going to get harder to win.”

Bloom has also played a part in helping the sport grow.

“I had a message from young spinal cord injury surfer, Max Devery, a few months ago about competing – he’s just 16 and he came all the way from WA with his dad and his friend,” she said.

“He was so good out there and finished with a third place. I was so stoked for him and to see him experience how great it is to compete. That’s the best thing about it, for all of us, life hasn’t turned out the way we thought it would, and we face a lot of challenges, but events like this make it all worthwhile.”

Mark ‘Mono’ Stewart’s reign in the Kneel division came to an end as Newcastle’s Reddog Wheatley came to the fore with a number of great waves and opportunities. Wheatley was able to put his full surfing skillset on show for the judges – not only did he get vertical on his turns, creating powerful snaps, but a couple of waves gave him small cover ups as he pulled in to try to get as much as he could out of them.

“I’m on top of the world, my first Australian Title. I wish my mate mono was one-hundred-percent though, we’ve been mates for a long time, we’re the originals that went to the first World Championships in 2015, and I said to him, when you don’t compete I win. He’s a tough competitor and amazing surfer,” he said.

“The conditions were great for us and the waves felt good. It was nice to get good. The big waves suit me a lot more, in smaller waves I struggle to make-do but solid conditions like today allow you to show your skill,” Wheatley said.

Meanwhile, today was also South Australian, Jocelyn Neumueller’s first Australian Championships in surfing. The Paralympic Canoe athlete, who only has the use of one limb, dominated the Prone 2 division. In the second heat she scored an impressive and near-perfect 9.65 with a backup score of seven to lock in her first Australian Para Surf Title.

“I love surfing because the ocean doesn’t discriminate. Once you’re on a wave you have the same capacity to ride the wave as anyone else. Your functionality on land is irrelevant, the water is the most amazing leveller, it brings equality,” she said.

Lee Ferrier (NSW) continued the impressive surfing in the Mixed Prone 2 division to wrap up the day. Ferrier opened the heat with a huge 9.25 using the face of the wave to generate speed and manoeuvres with precision.

Over 70 bodyboard athletes from across the country will spend Sunday and Monday competing in the 40th Australian Bodyboard Championships. The final event of the 17-day Australian Surf Championships will crown the last eight 2022 Champions.

See the state champions from Western Australia, South Australia, Victoria, Queensland and New South Wales take on the Port Macquarie swell that is expected to remain in the 4-6 foot range.

View the draw and watch live via Live Heats