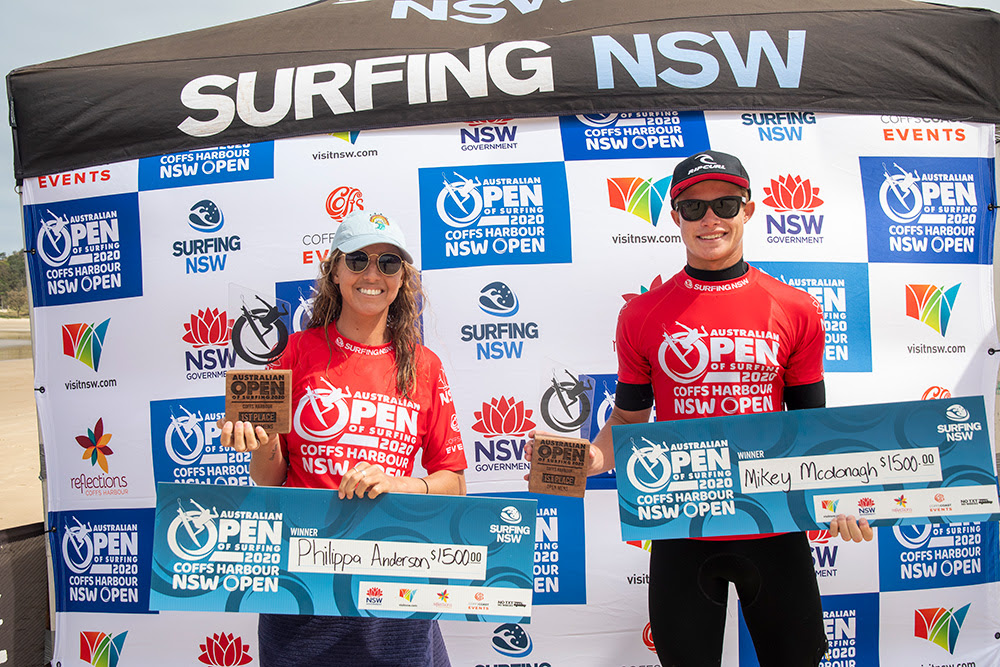 Philippa Anderson showed she had copious amounts of experience surfing at a high-level, taking down her younger fancied competition in the Open Women’s final. Anderson made her mark on the final early in the exchange, posting a 7.67 and a 6.33 to take her two-wave heat total to 14.00. The seasoned competitor executed a handful of beautiful snaps on the tricky low-tide sandbank to gain the upper hand in the final and as a result, left her closest rival, runner-up Ellia Smith (Coolum Beach, Qld) needing a solid 7.94 wave score to take away her lead.

“After getting third-place finishes in the Cronulla Open and the Mattara event, it definitely feels good to get the win,” said Anderson. “My coach and I had developed a game plan to get in two decent turns on a wave as I knew it was going to be a hard feat with the lower tide. Those younger girls definitely keep you on your toes, so I definitely wanted to get the win ahead of them.”

Hot off a win with his local Le-Ba Boardriders at the recent nudie Australian Boardriders Battle, Mikey McDonagh capped off a giant long weekend of massive results taking out the Open Men’s division. McDonagh started off slow, only posting tiny scores in the opening stages of the heat, but was able to capitalise when punchy waves arose, notching up an 8.33 and 7.83 to post a decent 16.16 two-wave heat total. Runner-up Chris Zaffis (Angourie, NSW) showed moments of flair in the heat, holding down the lead for portions of the final, but was pipped by McDonagh by a 0.53 point margin.

“It was a gigantic long weekend of surfing here in Coffs and I was pretty cooked yesterday from a giant day on Saturday at the Boardriders Battle, but I came here this morning pretty fired up to compete,” said McDonagh. “After the first heat this morning, the conditions changed so much and I found that it really suited me as the heats went on. I’m just stoked to have taken this out.”

The Coffs Harbour Open saw approximately 100 competitors surfing across the male and female divisions and formed the sixth of eight events on the Australian Open of Surfing Series.

Surfing Australia and Surfing NSW are stoked to announce the three NSW qualifying events and the National Final in the 2020/21 nudie Australian Boardriders Battle Series and the remaining Australian Open of Surfing series events will be streamed live on Kayo Sports.

The prime locations for the Coffs Harbour Open were Park Beach and Macauleys with backup locations of Diggers, Gallows and Sawtell.

The entire Australian Open of Surfing series features eight events that will take place in the latter months of 2020 and provide professional and aspiring surfers with the opportunity to win prize money and gain momentum going into 2021.

Each event in NSW will see a total $7000 prize purse with $1500 going to the winner of the Men’s and Women’s divisions.

In addition to a larger prize purse, all events on the Australian Open of Surfing series will be webcast live through surfingnsw.com.au and the Surfing NSW Facebook.

All events will adhere to strict COVID-19 policies and regulations outlined by the Australian Government and council protocols.