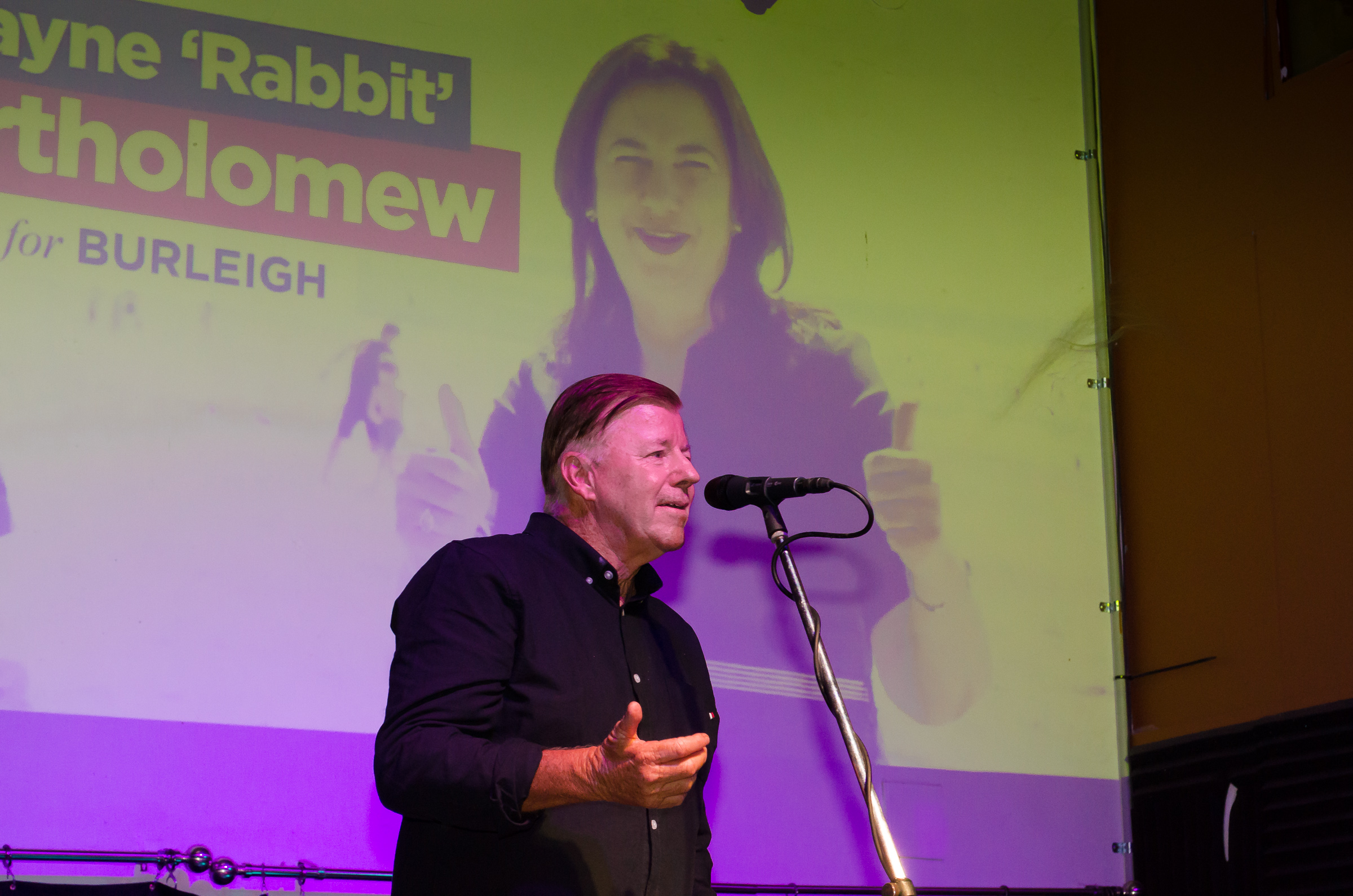 Wayne Rabbit Bartholomew was full of political campaign passion at his official launch for the seat of Burleigh.

1978 World Champion and former Surfing Australia National Coach, Wayne Rabbit Bartholomew has thrown his hat into the political ring seeking to win the seat of Burleigh in the upcoming Qld State Election.

“I want to stand up for youth issues, creating career paths and providing healthy spaces and sporting amenities, ” said the Gold Coast surfing legend who was endorsed by the Premier of Queensland Annastacia Palaszczuk.

Bartholomew has and continues to wear many hats in his diverse ambassador roles such as ambassador for Wipeout Dementia.

He has been a passionate fighter for environmental and social causes and backs the Premier 100% on her Governments economic recovery package to overcome the impact of COVID-19.

“Health has become a top priority and admire the Premier’s tough stance to keep Qld safe from the pandemic spread.

A healthy state ultimately provides for a wealthy state. I look forward to when we can safely open up the borders again.”

Bartholomew has always been a strong advocate for local issues and as patron of Gold Coast World Surfing Reserves is delighted with the Premiers to push to legislate to protect the waves from Burleigh Beach to Snapper Rocks and the 16 kilometres in between.

“This will make the WSR more than just ceremonial and help protect the surf breaks from any detrimental impacts. It will not restrict, it will help preserve and protect our iconic point breaks, arguably the best in the world, for the future generations.”

The former boss of Association of Surfing Professionals who is credited with engineering the World Dream Tour “The best surfers judged in the best waves globally.” Rabbit had to fight his fair share of battles in the boardroom.

He is stranger to negotiating the best outcomes and Bartholomew is set to bring to the political table his unique set of negotiating skills that will keep him in good stead for a new career in politics, should he be elected into the Qld State Parliament on Saturday 31st October.

The earnest Bugs4Burleigh campaign is on.

“I am determined to fight for local causes affecting the Gold Coast such as high density over development. I successfully argued to set up a comprehensive community consultation process for the proposed light rail from Burleigh to Coolangatta. It’s a matter of getting the balance right and putting all the options on the table.” said the tireless campaigner.

The big question is, will Wayne Rabbit Bartholomew, who was awarded an AM for the environment, social and fundraising causes, be voted in and have MP attached to his name such as the other famous MP, his old friend and fierce rival Michael Peterson.