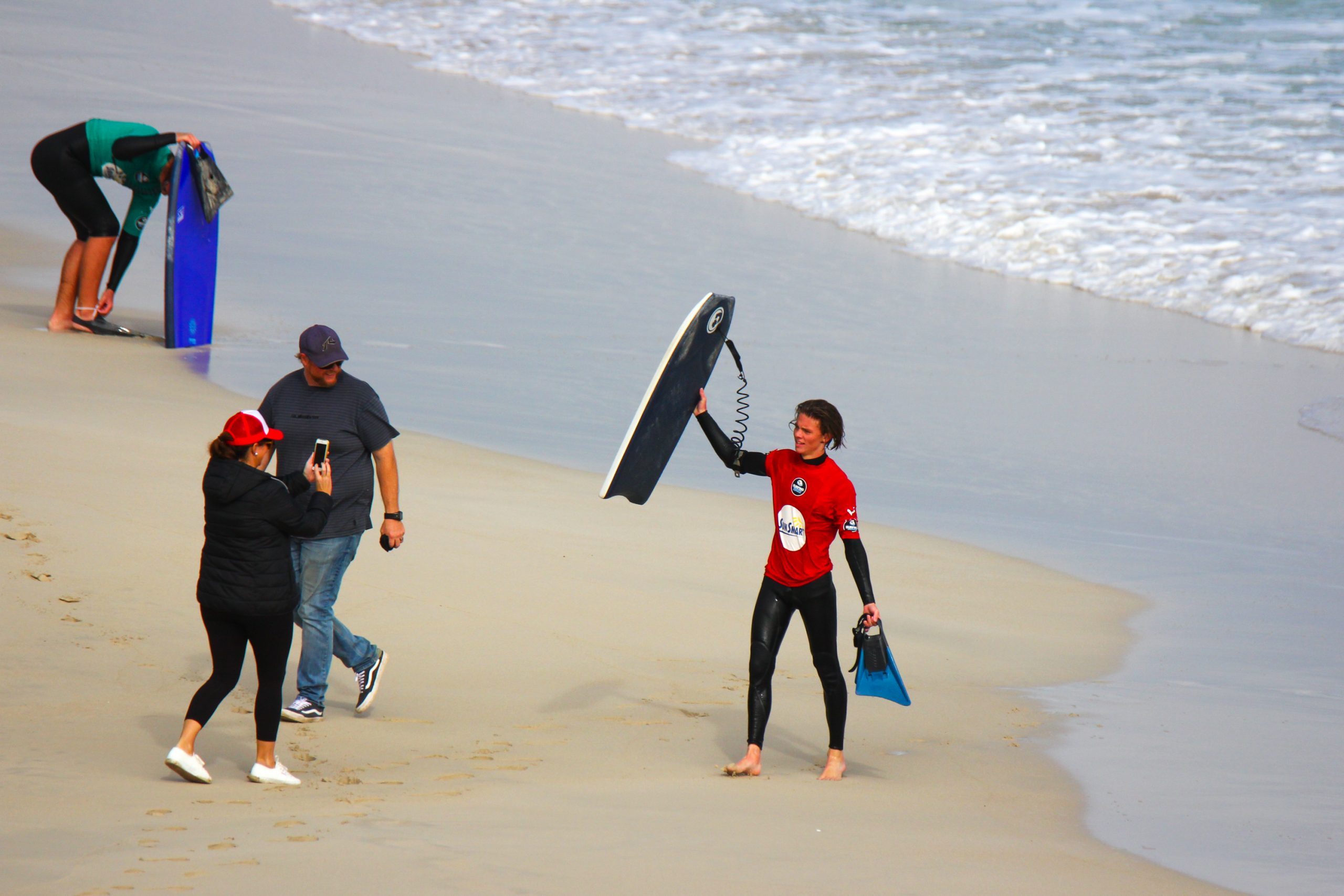 A small but elite field of competitors from across WA shone brightly in better than expected conditions along Perth’s northern beaches, with 2-3 feet wedges provided the perfect setting for high-performance bodyboarding to ensue.

Despite the forecast of strong winds and heavy rain, competitors were greeted with light offshore winds and mostly sunny skies with plenty of spectators making the most of Clayton’s natural amphitheatre, as people lined the footpath to soak up the festival atmosphere on offer.

Big moves and big scores flowed during the 25-minute final, with all riders displaying the skills required to claim the win. It was consistency that benefited Kai De Legh, who spun, rolled and flipped his way to a combined total of 13.70 (from a possible 20). In one of the closest finishes of the event just 1.73 points separated all four finalists when the siren sounded.

“That was a great final and it’s always nice to get one up on my brother Joshy,” said De Legh. “The boys all surfed well and pushed me all the way and I’m stoked to be State Champion.”

Mindarie local Ebony Schell captured her third consecutive Open Women’s State Championship with her win coming in front of many friends and family. Schell will be one to watch at the Australian Titles in Port Macquarie, NSW in August.

“I look forward to competing against all the best girls in the country,” said Schell. “Thanks to Bronwyn and to all my supporters here pushing me to get better.”

Albany’s Elijah Medling claimed the Under-18 Junior Boys State Championship and claimed the West Coast Suspensions Wave of the Weekend for an excellent Air-Roll-Spin (ARS) that scored 9.07 (from a possible 10). Medling was too strong for reigning Under-18 State Champion Riley Schell (Mindarie) and John Salmond (Quinn’s Rock).

“I’m stoked to take the win and to be State Champion has been a long time coming,” said Medling. “The forecast was looking a bit rough, but it turned out to be a great event and I’m really looking forward to the Aussie Titles.”

Stirling Stillwell (Cottesloe) was the best of the events youngsters, taking out his maiden State Title with victory in the Under-16 Cadet Boys. Stillwell defeated another impressive newcomer, Byron Timmons (Yanchep).

Tyler Brown (Mindarie) made light work of conditions at his home break. Brown made a triumphant return to the SunSmart WA Bodyboard State Championships since last competing 10 years ago. Brown’s local knowledge proved too good for Sean Oberholzer (Yallingup) and Glenn Schell (Mindarie), who finished second and third respectively.

“I’m thrilled to take the win, bodyboarding means so much me and others here,” said Brown. “Well done to everyone and I can’t wait to do this all again.”

In other results from the weekend, Mark Boehm (Woodlands) defended his Drop Knee State Titles from 2021. While,  Glenn Schell (Mindarie) proved bodyboarding runs in his family by capturing the Grand Masters’ State Title.

“A big congratulations to our newly crowned State Champions, it’s been a great event,” said Surfing WA’s Events Manager Justin Majeks. “After a three year hiatus, I’m sure everyone is excited about heading to the Australian Surf Championships in Port Macquarie, NSW which has a strong connection to bodyboarding.”

The 2022 SunSmart Bodyboard State Championships offers competitors a chance to compete in a safe, fun and friendly environment, whilst providing a pathway to the National Titles, where the best riders in the country are set to converge.

For more information on this or any other WA event series be sure to log onto www.surfingwa.com.au and check out all the Surfing WA social media platforms for event updates and information.

About SunSmart:
Western Australia has one of the highest rates of skin cancer in the world. Protecting yourself from the sun by being SunSmart is a simple and effective way of reducing your risk of skin cancer. Remember to Slip on sun-protective clothing, Slop on SPF 30 sunscreen or higher, Slap on a broad-brimmed or bucket hat, Seek shade and Slide on some wrap-around sunglasses. When the UV is 3 or above, be SunSmart. Visit myUV.com.au for your UV forecast.