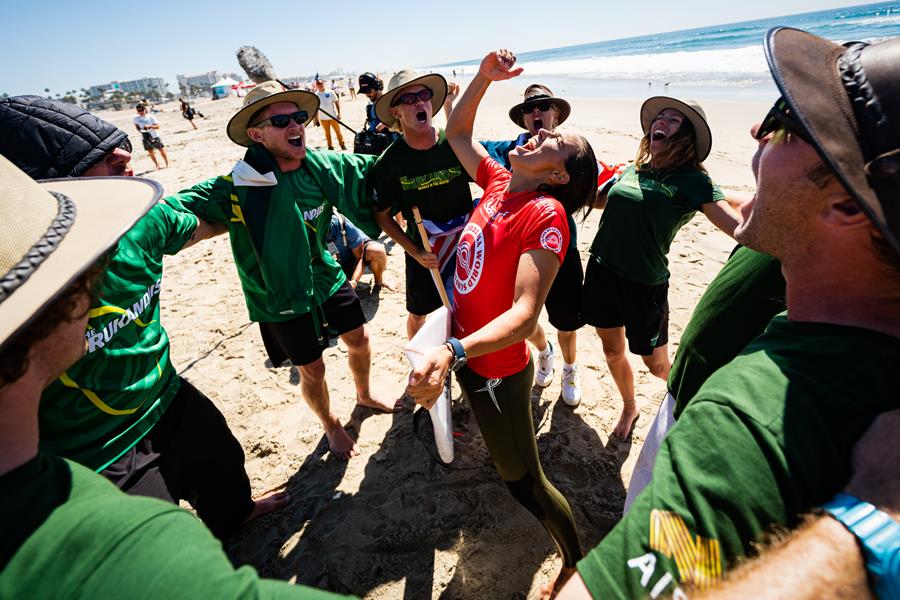 CASUARINA/NSW(September 26th/2022): The Irukandjis have won a silver medal overall at the International Surfing Association (ISA) World Surfing Games which wrapped up on Saturday 24th September at Huntington Beach, California.

Merewether’s Jackson Baker has been doing incredible surfing all week and charged his way through 9 heats to make the final. But it was an unstoppable Kanoa Igarashi (JPN) and Indonesian olympian Rio Waida (IND) who would take the gold and silver medals, leaving Baker with the individual bronze medal ahead of Guilherme Fonseca (POR).

Sally Fitzgibbons, a three-time ISA World Games Gold Medalist, battled her way through eight heats to find herself in the final with fellow veteran Pauline Ado (FRA), Daniella Rosas (POR) and the host nation’s Kirra Pinkerton (USA). There was a lot on the line in this final with an additional Olympic spot at stake for the winning team by gender, and with a strong finish Pinkerton got the win, securing the gold medal and the additional spot in the Paris 2024 Olympics, beating The Irukandjis by just 65 points. Fitzgibbons finished in third place ahead of Rosas.

Surfing Australia’s National High-Performance Director, Kate Wilcomes highlighted both the disappointment of missing out on the additional olympic spot, but also the promise for the future of Australian surfing on the world stage.

“This result stung the team as we were incredibly close, just 0.12 off of having both Sally and Sophie McCulloch in the final”

“But I couldn’t be prouder of the whole team’s dedication and support for one another. Watching this team work together made it one of the best ISA events I have been a part of.”

“They showcased the depth of talent in Australia and the threat we pose to the rest of the world. We’ll be back to fight for those spots again in 2024!”

The Irukandjis Head Coach Andy King, who returned to Surfing Australia at the beginning of 2022, said of the week:

“The team camaraderie was exceptional and they never gave up, creating opportunities when it didn’t seem like it was possible”

The Irukandjis will have another chance at securing a third Olympic spot for Paris 2024 at the 2024 ISA World Surfing Games. There are also two spots per gender that will be allocated via the World Surf League Championship Tour rankings at the completion of the 2023 season, and via ISA World Surfing Games results in 2023 and 2024.