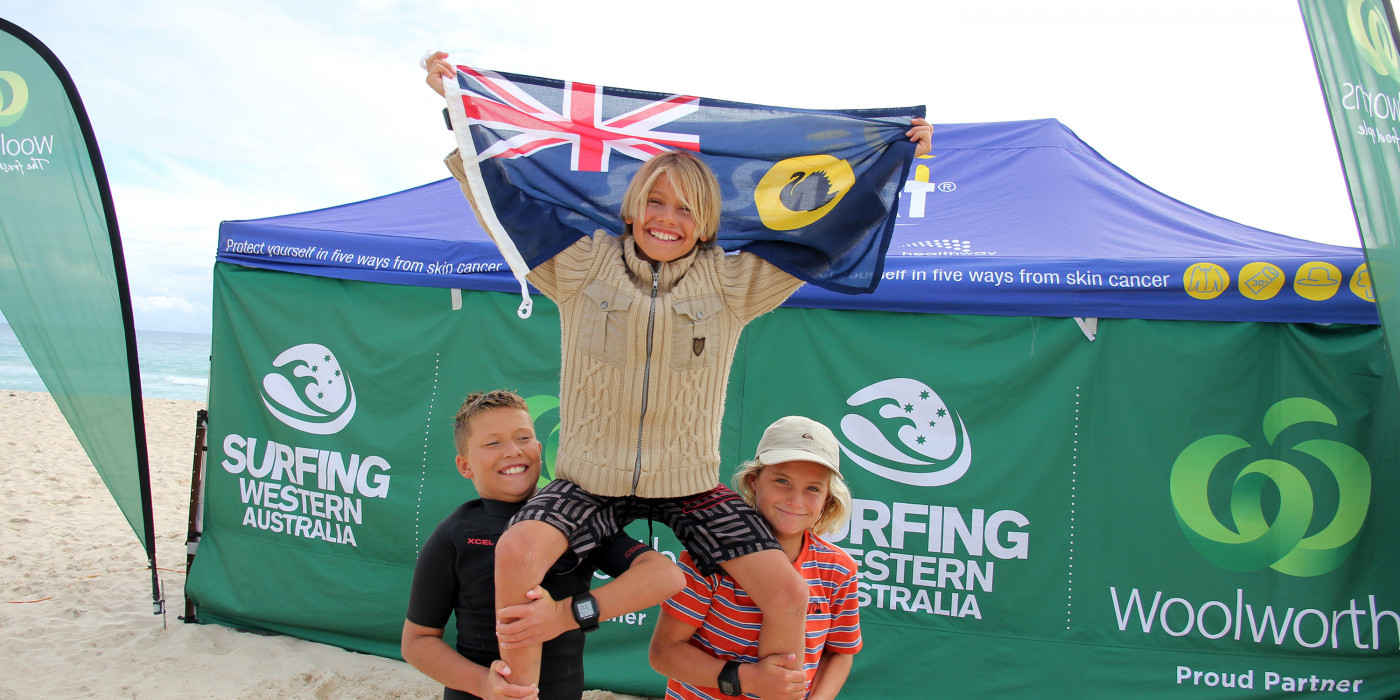 Fun and highly contestable 1-2 feet peaks provided the perfect setting for grommets from across the State, who converged in great numbers on Perth’s metropolitan beaches after previous events in Margaret River and Geraldton.

“l’m stoked to take the win and I’ve had a great weekend,” said Mitchell. “After a couple of second place finishes it’s nice to finish the series on a high note.”

Willow Hardy (Margaret River) confirmed she’s a star on the rise, taking out the Under-18 girls final on the strength of her strong surfing pedigree and immaculate technique. Hardy looked in sync with the conditions and posted a combined total of 12.73 (from a possible 20) on her way to the win. Zali Hewson (Margaret River), Skyla Tothill (Sorrento) and Milla Clifford (Margaret River) finishing second, third and fourth respectively.

“Thanks to all the girls in the final and for all the support for everyone here,” said Hardy. “Thanks to my parents, the event sponsors and my sponsors as well.”

Brock Launders from Margaret River posted one of his best results recently, taking out the hotly contested Under-16 Boys division. Some smooth and rapid fire turns that saw him post a 12.68 two-wave total, which included an excellent 8.00 (from a possible 10). Yallingup’s Otis North finished in second, ahead of Jack Mickle (Trigg) and Travis Barkhuizen (Eglington).

“It’s always nice to get a win and it’s been a little while since my last one, so I’m stoked with this one,” said Launders. “The waves have been way better than I expected and I enjoyed competing against all these boys.”

The second place finish for North backed up his win in Margaret River to saw him claim the Under-16 State Championship Title for 2020.

“It means a lot to be crowned State Champion,” said North. “It was a really close race between a few of the guys I want to thank them for pushing me all the way.”

Zali Hewson (Margaret River) was on fire all weekend and continued her great form in the Under-16 Cadet Girls final, where she displayed amazing wave selection and manoeuvre execution to fend off Willow Hardy (Margaret River), Ruby Berry (Augusta) and Maddy Cox (Ocean Reef).

“After missing the first event at home in Margaret River I didn’t know how my year would go,” said Hewson. “I was happy with my performance in Geraldton and it’s really nice to finish the series off with a win.”

Maverick Wilson (Dunsborough) claimed the Under-14 Grom Boys State Title in one of the closest results of the weekend. Despite some great surfing of his own, Wilson was challenged all the way by an exciting group of finalists who nipped at his heals at every opportunity. Wilson’s heat high 6.38 (from a possible 10) was the difference in the end as Okie Fraser (Margaret River), Remy North (Yallingup) and Sebastien Low (Trigg) searched hard for solid back up scores.

“That was a little bit too close for my liking,” said Wilson. “The boys pushed me all the way and to win the State Title is a result I’m really proud of.”

Kaleisha Launders (Margaret River) kept the winning run going for her family, backing up older brother Brock’s win with a spectacular win in the Under-14 Grom Girls division. Launders’ smooth and flowing turns were a delight to watch as she ran away with the show, posting a combined total of 13.50 (from a possible 20), which included a 7.0 and a 6.5. Olive Hardy (Margaret River), Leila Fraser (Margaret River) and Ruby Berry (Augusta) all surfed well and rounded out the top four.

“All the girls push each other to get better and better,” said Launders. “Our whole family loves surfing, it’s the best”

Kade Martin (Dunsborough) was a popular winner in the Under-12 Micro Grom division, using his powerful back footed approach to stomp sections and throw spray all over the place. Martin posted a two-wave total of 13.10 (from a possible 20) to defeat Olive Hardy (Margaret River), Kye Launders (Margaret River) and Aston Grime (Secret Harbour).

“This is has to be the best way to start the school holidays ever,” said Martin. “Thanks to everyone their support and for my parents for getting me here.”

Margaret River’s Max Ghiretti’s best two results from the three event series, saw him take out the Under-12 Micro Groms State Title. Ghiretti’s first year competing in the Woolworths WA Junior Surf Titles saw him crowned State Champion in a division that is an indicator of future success.

“I was two or three when I started surfing and I just love it,” said Ghiretti. “Thanks to everyone who has helped me get here today.”

For more information on this or any other WA event be sure to log onto www.surfingwa.com.au and follow Surfing WA’s social media platforms for event updates and information.