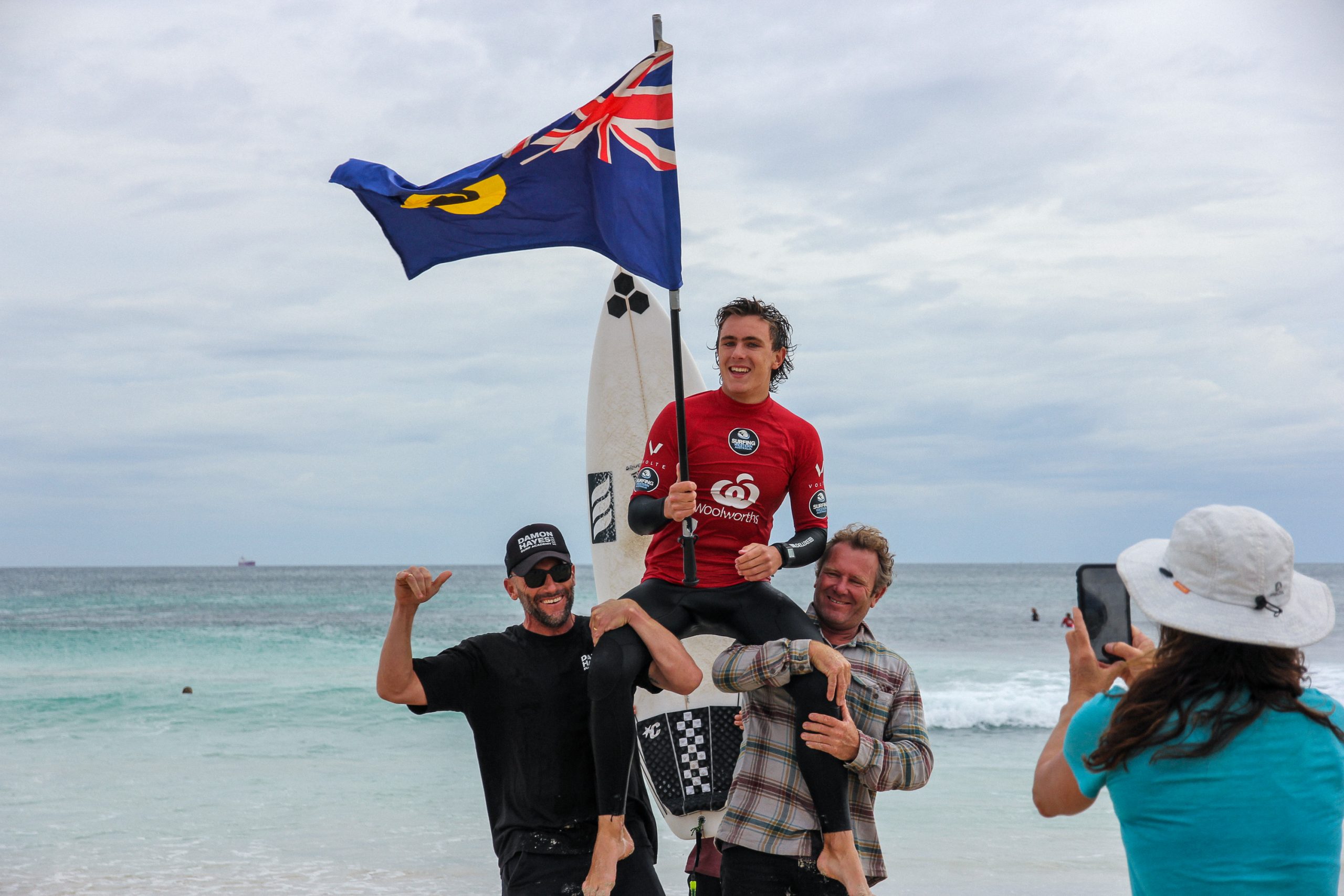 Small and sunny surf on Saturday made the going tough, but as Tropical Cyclone Seroja tracked south along the WA coastline, it brought a change in conditions for Sunday’s finals. Overcast skies and drizzling rain couldn’t dampen the spirits of the hoard of frothing grommets who highlighted an exciting weekend of competition.

Gracetown’s George Simpson captured the Under-18 Junior Boys State Title, backing up his win from Margaret River in March with some impressive small wave surfing on display. Simpson has been in fine form of late and carried it into this event, winning every one of his heats he surfed including the final.

“The waves have been small, but really fun,” said Simpson. “I’m stoked to be State Champion and I’d like to thank the boys in the final and everyone for their support.”

Hardy was challenged by Ruby Berry (Augusta), Zali Hewson (Margaret River) and Skyla Tothill (Sorrento), but rose to the occasion when it mattered most, dropping a heat high 7.83 (from a possible 10), backing it up with a 5.67 to finish on a combined total of 13.50 (from a possible 20).

“The waves have been challenging, but pretty fun when you got a good one,” said Hardy. “I’m happy to have won and I’m glad the swell came up for the finals.”

Yallingup’s Otis North proved he can do it in the big waves of Margaret River and the small waves of Perth, taking out back-to-back wins and the Under-16 Cadet Boys State Title.

“It’s been a fun weekend and the waves today were actually pretty fun, although they were small, they had great shape,” said North who successfully defended his State Title from 2020.

Ruby Berry (Augusta) battled hard for victory in the Under-16 Cadet Girls final with just 0.74 separating first, second and third when the final siren started. Berry’s backhand was lazar guided, fitting turns into the pocket with ease, posting a two-wave total of 13.07 (from a possible 20).

“That was super close,” said Berry. “I know how well all of the girls can surf, so I was relieved to hear the siren sound, I’m looking forward to Geraldton and I love the waves up there.”

Jack Bulloch (Secret Harbour) was a surprise come from behind winner in the Under-14 Groms Boys Final, using his powerful approach to taking out his first ever win at State Title competition.

Bulloch defeated Jake Scott (Swanbourne), Maverick Wilson (Dunsborough) and Sid Englert (Margaret River) to put himself into a position to qualify for the State Team in 2021.

“That was a crazy final and I wasn’t even sure I had won until I was on the beach, said Bulloch. “I’d like to thank my family for all their support and Wooly for all his tips and advice.”

Grace Cook (Cowaramup) was another first-time winner over the weekend, taking out the Under-14 Grom Girls division. One of the most stoked surfers you’ll ever meet, Cook’s smile was hard to hide after her maiden win at the Woolworths WA Junior Surf Titles.

“I’m so happy right now,” said Cook. “It’s been a great weekend and thanks to all the people here cheering me on.”

Jahli Clarke (Cowaramup) sliced and diced his way to a memorable win in the hotly contested Under-12 Micro Groms division. Clarke will be a surfer to keep your eye on into the future, with some fantastic surfing on display.

The weekend saw close to 100 grommets aged between 9 and 17 years of age converge on Trigg Beach from all corners of the State. The final event of the Woolworths WA Junior Surf Titles will head to Geraldton in July which will determine who will represent WA at the Surf Dive ‘n Ski Australian Junior Surfing Titles to be held in Queensland later this year.

“I’d like to congratulate our newly crowned State Champions and divisional winner,” said Surfing WA events manager Justin Majeks. “WA’s junior surfers continue to impress me and with four State Titles on the line, I’m sure Geraldton will provide some fireworks as well.”

Grace Cook was presented with the Creatures of Leisure Little Legend Award after reaching two finals and winning the Under-14 Girls division.