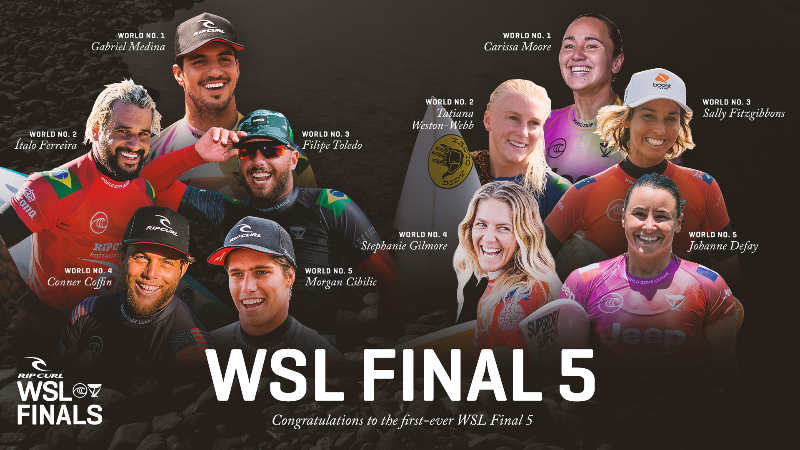 The WSL Final 5 were determined based on points accrued during the seven 2021 regular-season CT events, with each surfer’s top five of seven results counting toward their year-end ranking and the top five men and women on the WSL leaderboard earning their place at the Rip Curl WSL Finals.

“All eyes are on the Rip Curl WSL Finals, and we’re very excited to finish the 2021 season by crowning the World Champions at Lower Trestles,” said Jessi Miley-Dyer, SVP of Tours and Head of Competition. “This is set to be the biggest day in surfing history with the men’s and women’s world titles being decided on the same day. We have the top surfers in the world in this event and I can’t wait to see who will take it all home.”

Olympic gold medalist Moore comes into the event as World No. 1, giving her the advantage and a place in the best-of-three Title Match where the first surfer to win two out of three heats becomes the undisputed 2021 World Champion. Men’s World No. 1 Medina is chasing his third title and looking to cement his place as the best surfer in the world. A win for Medina would make him only the sixth surfer ever to claim three world titles.

World No. 2, Tatiana Weston-Webb (BRA) is fighting to become the first Brazilian woman to win a World Title, while reigning WSL Champion and Olympic gold medalist, Italo Ferreira (BRA), who is also the second seed, has a chance of winning back-to-back World Titles and making history by winning Olympic gold and becoming World Champion in the same season.

Sitting as men’s and women’s World No. 3 respectively, Sally Fitzgibbons(AUS) and Filipe Toledo (BRA) are both hunting their long-awaited first title. Fitzgibbons has never finished a CT event placed below 8th in her 12-year career while Toledo, who won the last CT event at Lower Trestles, has 10 CT victories under his belt since his debut in the surfing’s elite in 2013.

Men’s World No. 4, Californian Conner Coffin (USA) looks to lock his first World Title, which would make him the first American men’s champion since 2011, and the first Californian champion since 1990. Ranked in 4th place, the seven-time WSL Champion Stephanie Gilmore (AUS) is coming into the Rip Curl WSL Finals with the chance to make history by setting a new record and becoming the first woman to ever win eight World Titles. With the win, men’s World No. 5 Morgan Cibilic (AUS) would become the first-ever men’s rookie to win a World Title and solidify his position as the new face of Australian surfing. On the women’s side, Johanne Defay (FRA) is sitting on the fifth spot and, if she wins it all, would be the first European women’s World Champion.