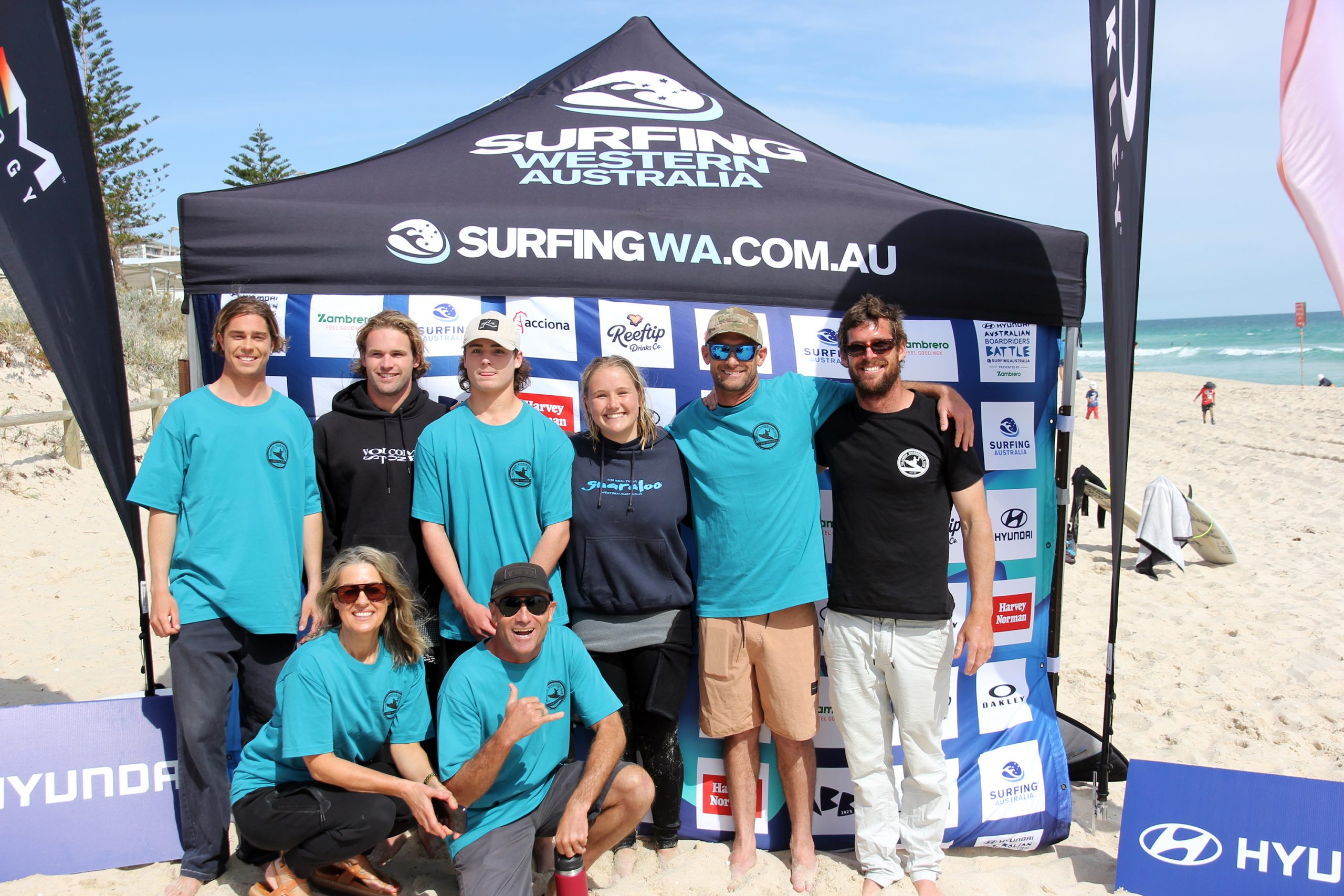 Yallingup Boardriders Club captured an impressive victory at the second stop of the Hyundai Australian Boardriders Battle (ABB) presented by Zambrero, booking their place into the Grand Final where they’ll take on the best clubs in Australia.

The win for Yallingup is the club’s first since 2013, when the ABB series originally began. Yallingup defeated Trigg Point, Margaret River and Scarborough in an exciting final match up, which saw them lead from start to finish.

The ABB has unique and dynamic ‘tag team’ team format which saw clubs nominate 2 x Open Men, 1 x Open Woman, 1 x Master (over 35 years) and 1 x Junior (under 18 years) to compete, with each surfers best two scores  added together for a team total.

Yallingup’s squad of Josh Cattlin, Duke Nagtzaam, Emma Cattlin, Richard Sills, and Otis North were able to amass a winning total of 63.15, head of Trigg Point on 59.27, Margaret River on 54.65 and Scarborough 32.26.

“It’s been a great day and the club is so stoked to take the win,” said club stalwart Richard Sills. “It’s been a big goal of ours to get back over to the National Final and we think we’ve got the right surfers to challenge the best boardrider clubs in the country.”

“This is massive fro Trigg Point and the ABB Grand Final is as big as it gets for boardrider clubs,” said club captain Nick Muntz. “We had a few key crew missing today, but we were able to get the job done with a solid performance from all our surfers in the final.”

Boardriding clubs are the heart and soul of Australian surfing and events such as this give WA clubs a chance to display their depth of talent at a grassroots level.

“Surfing is typically an individual sport so when you get the chance to compete as part of a team it creates this wave of support and comradery that is very special and unique,” said Surfing WA Events Manager Justin Majeks. “Congratulations to Yallingup and Trigg Point for qualifying for the Grand Final in NSW in 2023.”

Yallingup’s Duke Nagtzaam captured the Oakley Prizm Performer Awards for his stellar performance throughout the event. While Trigg Junior Boardriders’ Jesse Siedmiogrodzki claimed the Harvey Norman High Performer Award for the highest individual score of the day, an excellent 8.17 (from a possible 10).

The Hyundai Australian Boardriders Battle is an unprecedented event series involving over 60 of Australia’s Boardriders Clubs in eight State qualifying events and culminating in a National Final for 24 clubs at the Grand Final in February, 2023.

The event also incorporated the Hyundai and Surfing Australia ‘She’s Electric’ national women’s leaderboard. She’s Electric is a platform to recognise and amplify female grassroots athletes on a national scale by leveraging LiveHeats data from the Australian Boardriders Battles. This leaderboard aims to give female boardriders a profile, unearthing breakout talent and creating a pathway to the top – inspiring the next generation of surfers.

For previous results, images and video highlights head over to www.australianboardridersbattle.com​